His skis nearby, John Gabin lounged at a picnic table, gazing up toward the steep slopes carpeted with snow.His 4-year-old son sprawled on his outstretched legs.

“It’s a getaway from L.A., the city, you know?” said Gabin, 46, of North Hollywood, who rented a house in Big Bear Lake with his wife, their two children and a friend for several days.

He spent the sunny midweek morning in January at Snow Summit Resort teaching his children to ski, a pastime he’s carried on since his days as a child living in France.Now, it’s a means to escape the ongoing surge of coronavirus cases as the Omicron variant spreads rapidly throughout the dense neighborhoods of Los Angeles.

You can’t get tested anywhere.It’s a lot of stress.That’s why we have to get away.”

Advertisement Mountain resort areas like Big Bear have long been vacation or day-trip destinations for Southern Californians, but during the pandemic and an early winter of healthy snowfall, the number of visitors has spiked, as people seek activities that still allow for social distancing and other safety measures to avoid infection, officials and businesses owners said.

Yet while the influx of visitors bodes well for the local economy, it has strained the Bear Valley’s infrastructure and workforce.Throughout this winter season and last, residents, workers and business owners in Big Bear have dealt with increased exposure to the coronavirus, understaffing, shortages of essential services, housing shortages, traffic and parking congestion, and litter.

“We are experiencing, in a microeconomic sense, the problems that everyone else in the whole country is experiencing,” said Ellen Clarke, executive director of the Big Bear Chamber of Commerce.

“Only in our small community, we have a very little population, and it hurts — it hurts a lot.”

Brody Barr helps customers Justin and Brandon Han of Whittier at Johnny’s Ski and Board House in Big Bear Lake.(Gary Coronado / Los Angeles Times) Brody Barr, who works at a ski and snowboard rental shop along Big Bear Lake’s main thoroughfare, said the increased crowds are a welcome sight, but with a shortage of staff, he and other employees have had to work overtime throughout the holidays.He said many of the store’s customers are first-time skiers or snowboarders who picked up the sport during the pandemic.Many had never set foot on the mountain before.

The influx was especially difficult this year since workers were still reeling from the COVID-19-related death of the shop’s longtime owner in December, Barr said.

“It is very likely that he contracted it working here,” Barr said.

“Not only do we get a lot of people from San Diego and Los Angeles, but also people from all over the world coming here.”

The death has led more workers at the shop to be more cautious about COVID-19 safety while on the job, Barr said.

“Between people having COVID or the fear of getting COVID has really hampered both the hiring, but also retention of employees,” said Clarke, with the Chamber of Commerce.

One of the local grocery stores is down about 30 employees, and drivers for the shuttle system that buses visitors to and from ski resorts have left in droves, Clarke said.

Larger businesses, such as Snow Summit, owned by an Aspen, Colo.-based conglomerate, said they too were hit by staffing shortages, with some of their employees recently testing positive for the coronavirus.

Ski and snowboarding season is in full swing in mountain resorts like Big Bear, where tubers at Alpine Slide at Magic Mountain make a run.(Gary Coronado / Los Angeles Times) “We’re not in some sort of bubble, or exempt from what everybody else is experiencing,” said Justin Kanton, a spokesperson for Snow Summit.

Matthew Miller, who grew up in Big Bear Lake and now owns a small chain of ski and snowboard rental shops, mostly along Highway 18, said several of his employees tested positive for the coronavirus in recent weeks.Most of his staff, including himself, contracted the disease last winter.Now, fewer people are applying.

Most days, he’s left fielding phone calls, trying to persuade people to work for him, as he runs between his shops trying to plug holes in his business.

“Some moments it’s just too hectic and too busy,” said Miller, who lives in Redlands and drives up the mountain four to five days a week.

He waved at a couple hauling several snowboards from one of his shops in Running Springs, about a half-hour drive from Big Bear.

“This year was like the perfect storm,” Miller said.“We had snow, honestly a few days before Christmas.They were able to get the roads cleared by Christmas, and then boom, it was kinda crazy.”

Miller said he’s seen a lot of first-time skiers and snowboarders coming through his shop since 2020, especially amid lockdowns, which he called “a billboard to come to the mountains.”

A major storm system in December blanketed mountain resort areas like Big Bear Lake.(Gary Coronado / Los Angeles Times) “Once you get over 5,000 feet, man, it seems like people just do what they want.

You just feel more liberated,” he said with a smile, looking out through his shop’s doors toward mounds of snow piled alongside the highway that leads to Big Bear.“It’s the mountain air, man.”

But with that feeling of liberation also comes a host of other problems.

Illegal parking remains a huge issue for cities like Big Bear Lake, where some visitors frequently block driveways of homeowners, or park on people’s lawns, said Ryan Orr, spokesman for the city.Some visitors trespass onto private property to have snowball fights and push their sleds.

Broken plastic sleds, colored bright yellow, pink or green, dotting the white hills, are a common sight in the city during winter, Orr said.Some visitors leave litter behind.Some residents have found used diapers left along the lake, while there have been reports of people defecating and urinating along highways.

In response, the city hired two code enforcement workers and funded two deputies with the San Bernardino County Sheriff’s Department, who have ramped up enforcement on issues such as parking, doling out more than 600 parking citations, each carrying a $100 fee, since Dec.

“We welcome our visitors.That’s the only reason we exist.It’s no illusion we’re a tourism-based town,” Orr said.“And citations are our last resort.We really want to educate people on using common sense, treating our home like their home.”

Traffic congestion has also been a nuisance for visitors and locals alike, some estimating trips from the foot of the mountain into Big Bear at three to four hours.Barr said his commute from Big Bear Lake to his home in Big Bear City, about seven miles away, can take up to two hours during peak traffic hours.One factor is the partial closure of Highway 18 , which was damaged by heavy rain and snowfall.

And in the San Gabriel Mountains, first responders in Wrightwood said mountain traffic jams have made getting to emergency calls more difficult.

Skiers and snowboarders at Snow Summit in Big Bear.

(Gary Coronado / Los Angeles Times) As more people living in urban cities and suburbs looked for alternative living conditions in 2020 while much of work and school remained remote during lockdowns, the demand for short-term rentals in rural places like Big Bear increased and the value of housing shot up.Similar trends could be seen in other rural resort cities across the West, such as Lake Tahoe, Aspen and Park City.

To meet that spiking demand in Big Bear were second-home owners, those who don’t live on the mountain year-round, said Larry Vaupel, who heads the city’s tourism department.They own the vast majority of Big Bear Lake’s 10,000 homes.

Wanting to cash in on the boom, 400 second-home owners converted their houses to vacation rentals, a 20% increase, Vaupel said.

Shouldering the brunt of the boom in housing value were permanent renters, who often work low-wage service industry jobs in the area’s resorts, some of whom couldn’t keep up with rising rents and were displaced from their homes, Vaupel said.

In a Facebook group for residents, Barr said he recently heard from two single mothers who were evicted.He said it’s common for people to make such announcements on the page and for other residents to provide temporary support such as donations or a room or couch to sleep on until they get back on their feet.

“It comes down to a source of greed,” Barr said of the influx of increasing rent and vacation rentals.

Permanent residents of Big Bear also had less access to essential services such as electricians and plumbers, who were overwhelmed by the number of second-home owners converting their homes into vacation rentals, said Clarke, with the Chamber of Commerce.

And for businesses, the lack of affordable housing has only exacerbated their struggle of hiring and keeping workers, Clarke said.

She heard from one business which had an ideal candidate from a city located down the mountain.

Even though they offered her the job, they weren’t able to hire her after she couldn’t find housing in town.

Though solutions around housing issues remain uncertain, the city has taken other steps to bolster its infrastructure, such as installing more public bathrooms and trash containers for visitors, more bike paths and added parking at trailheads, Vaupel said.

“I think we learned a lot of lessons from 2020 — they are hard lessons and they came fast,” he said.

In the meantime, Clarke worries for workers, and shorthanded small-businesses owners like Barr and Miller gear up each week for another weekend surge.

“They’re working incredible hours,” Clarke said.“They are worn out — the whole community is worn out.”.

Fri Jan 14 , 2022
President Joe Biden on Wednesday touted the new consumer inflation report as evidence that price jumps have started to slow, but acknowledged that the economy has a ways to go before Americans see cost hikes return to a typical level.”Today’s report—which shows a meaningful reduction in headline inflation over last […] 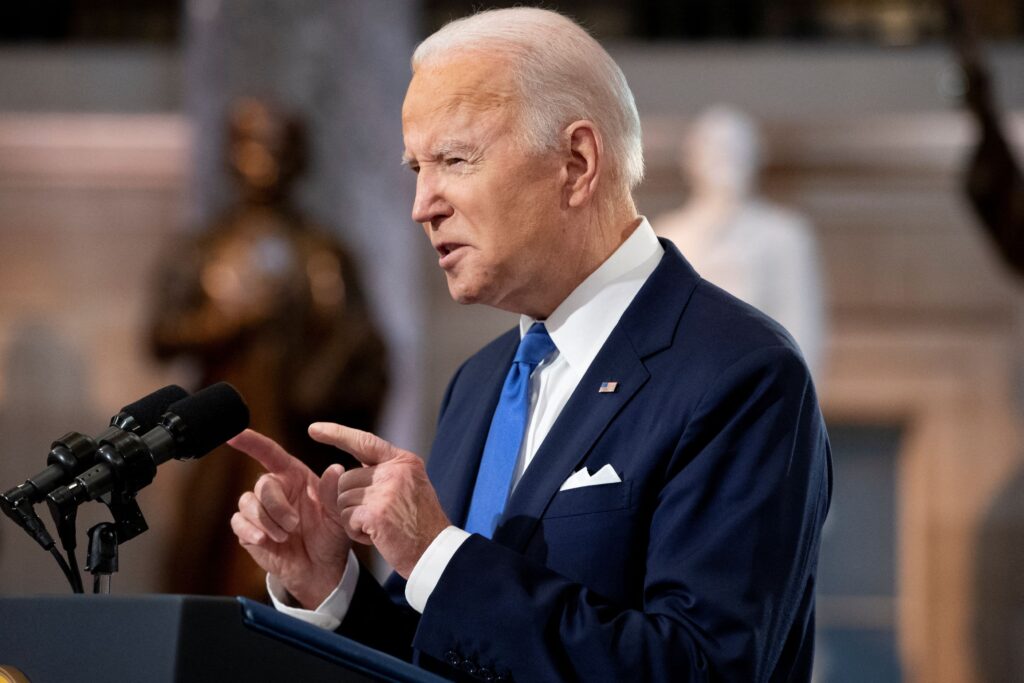