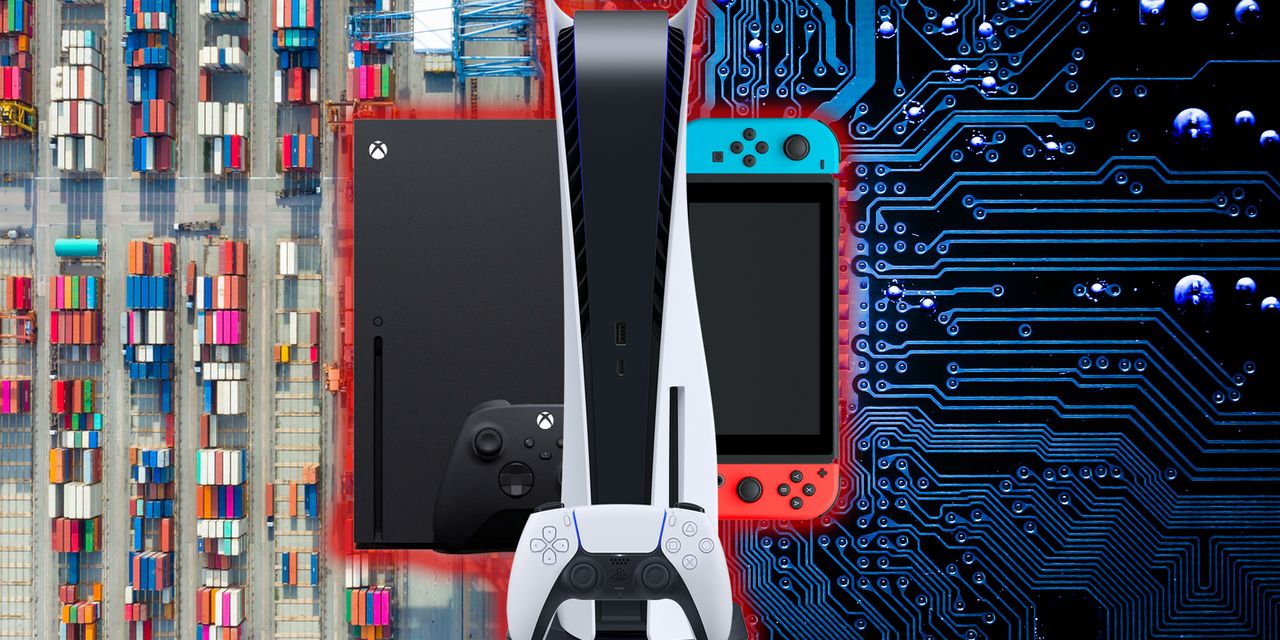 While the videogame industry continued to enjoy a pandemic boost in 2021, investors and analysts expect less in 2022, as continued semiconductor shortages and game delays combine with expectations that many will turn off the PlayStation and leave the house.

A lot of that expected flattening has to do with the assumption that the worst of COVID-19 has passed, and that even with variants like delta and omicron popping up, stay-at-home conditions will not go back to what was seen in 2020 and early 2021.

“In my models and discussions with folks, we’re certainly thinking that life will return to something more normal, especially in countries where the vaccination rates are over 50%, 60%, 70%, 80% in some cases,” Ward told MarketWatch in an interview.

Also read: For the videogame industry to grow, it needs to first grow up

Ward said he expects “that there will be a return to normalcy and a substantial minority of the people that were first-time gamers go back to being non-gamers, and a substantial minority of the people who became much more intensive gamers will go back to spending their time and money doing other pursuits beyond gaming, that there will be something of a slowdown inherent in that.”

Games themselves will also be a big issue, as many major releases have faced delays, with no publisher wanting to experience the same fan and media heat as CD Projekt SA CDR, +0.52% did after its bug-plagued 2020 release of “Cyberpunk 2077.” Publishers are more likely to keep updating their older games with fresh downloadable content to keep making money from previously successful releases.

“Those are the games that are going to continue to be the biggest because of that persistent content flow they have, and the big are going to stay big — now, trying to break into that tier is becoming exceptionally difficult,” Piscatella said.

For companies that went public in 2021, things were a bit different: Shares of Roblox are up 126% from their direct listing price of $45, and AppLovin Inc.

Console makers and buyers had it tough in 2021 Expectations for a shrinking console market come from product cycles and chip shortages.Ward said the current version of Nintendo’s popular Switch console was “getting long in the tooth” and that the company was pulling back shipments in anticipation of a new iteration in 2023.

Even with strong consumer demand, Sony pulled back shipments of its PlayStation consoles “by about a million units” because of production challenges, and “even though they haven’t said it,” Microsoft has run into similar challenges with the Xbox, Ward said.Microsoft showed its hand by having to resort to using developer models of the Xbox for a recent tournament because it couldn’t find enough consumer versions .

Ward said that console makers are not only contending with chip shortages, but then they have to deal with the logistics of getting the parts to the factories, and then getting finished products out of China to consumers as global supply-chain problems triggered by COVID-19 remain a problem.So, Ward said, the pullback in numbers reflects the console makers’ “own expectations of where they’ll be relative to where they’d thought they would be a few quarters ago.”

Looking at the larger chip picture, other analysts expect supply-chain problems to ease in 2022, but not by much.

“The overall supply landscape remains constrained, but we are generally seeing signs of easing,” Benchmark analyst David Williams said in a recent note.“Demand remains resilient despite inflationary pressures and well-telegraphed shortages across most end markets.”

“Although many areas of the supply chain have improved, we think the prior surge in commodity and transportation costs have not been fully worked through to end consumers, which may be a headwind to consumption in the new year,” Williams said.

Evercore ISI analyst C.J.Muse looks at it from the demand side and fundamentals in the industry, and said in a recent note “if you think the wall of worry was difficult in 2021, just wait.” Muse thinks a correction in the industry will more likely come in 2023 than 2022.

“On a secular basis, the semiconductor story is robust, with COVID accelerating the digitization of nearly every industry vertical,” Muse said.

“Sprinkle in product cycles including AI/ML, data center/networking infrastructure, the Metaverse, 5G, continued broad-based recovery across automotive/industrial, and there is much to like in Semi Land with a clear vision for silicon intensity rising as a % of GDP.”

Bugs or delay? Both result in angry fans Game development during COVID-19 has seen a rise in a common dilemma: If it’s taking longer than expected to develop a game by its announced release date, do you release it on time and risk it having bugs, or do you delay the release — sometimes repeatedly — to ensure it meets the highest quality-control standards?

Most publishers have chosen to go the latter route of late, after the “Cyberpunk 2077” debacle, which forced distributors like Sony to offer full refunds due to low quality and a lack of backwards compatibility with previous-generation consoles.

Then you have the possibility of the worst of both worlds: A delayed game that is not received well when it does hit.EA’s “Battlefield 2042″ was not only delayed by a month in its release but it became regarded as one of the worst-reviewed games in the history of online game site Steam, with gamers posting online videos showing bugs in the game.

Activision Blizzard said in November it would be delaying the release of two of its highly anticipated games , and Take-Two recently suffered a rough launch of its “Grand Theft Auto: The Trilogy – Definitive Edition.”

While IDC’s Ward said he thinks delays and bugs are “game specific” — meaning some games are more difficult than others to develop — International Game Developers Association Executive Director Renee Gittins said COVID-19 was the biggest headwind for developers.

“Particularly with the pandemic, we’ve seen a lot of game studios struggle with the transition to remote work,” Gittins said.“When you’re used to working in an open-office environment, where you have a lot of passive communication between teams and you can really more easily collaborate by have those informal meetings in person, being forced into a remote-work environment hurts that communication a lot.”

“There’s a lot of difficulties that game developers normally face and that’s only being exacerbated by this remote-work environment that many have been forced into by the COVID-19 pandemic,” Gittens said.

Videogames to give way to the metaverse? With new games proving harder to produce as older games continue to rake in cash, many are looking to the “metaverse” as the future of the industry.The concept — a virtual world in which users can build and offer their own experiences — is similar to what Roblox offers, and could offer the industry a way to not rely so heavily on single-game launches, Ward said.

“If the platform does well, you can monetize that for a long time, more than any single game,” he said.

“And I would say a company like Roblox may not be talking about the metaverse, but I think they’re closer to that than many other game developers and publishers in the sense that they want to be selling picks and shovels and Levis to the actual miners who will go out and make those experiences,” the IDC analyst said.

Privately held Niantic Inc.“seems to be inching away from ‘Pokemon Go’ as the main vehicle for monetization,” Ward said, and now they’re licensing their Lightship AR development kit “to become a platform company.” Niantic recently raised $300 million and is now worth $8.7 billion, according to Crunchbase.

Expanding game franchises to multiple platforms is also a big trend to look for, Piscatella said, a trend best exemplified by “Call of Duty,” which can be played on PC, console, tablets and phones.

One of those cross-platform categories includes free-to-play games, and the industry is finding better ways to make money off those.It used to be that free-to-play games would have a word from their sponsor, or have video “commercials”: Now developers have found a tweak to make that more fun for the player and more profitable for the sponsor.

Video advertising in games can either be unrewarded — in which a player is interrupted with an ad during game play and can skip it after a few seconds, or in some cases, has no choice but to let the whole ad run — or rewarded, where a player is asked if they want to watch an ad, and they’ll be rewarded with some amount of in-game resources.

Back in August, Zynga highlighted that their “watch to earn” ads were a major revenue driver, while AppLovin, which went public in April , not only makes marketing, monetization and analytics software for developers to grow their businesses, but also owns a portfolio of more than 200 free-to-play mobile games.

When it comes to rewarded ads, “more people like them than dislike them,” IDC’s Ward said.“This ad format is something that gamers actually like versus regular video ads, which are strongly negative.”.

Samsung will reveal Exynos chip with AMD graphics in January

Fri Dec 31 , 2021
Samsung started working closely with AMD back in 2019 , with the goal of improving the graphics capabilities of Samsung’s Exynos System-on-a-Chip (SoC) designs.Samsung confirmed at the time that the improved GPU capabilites would arrive roughly within two years, and a new tweet from the company confirms it might be […]