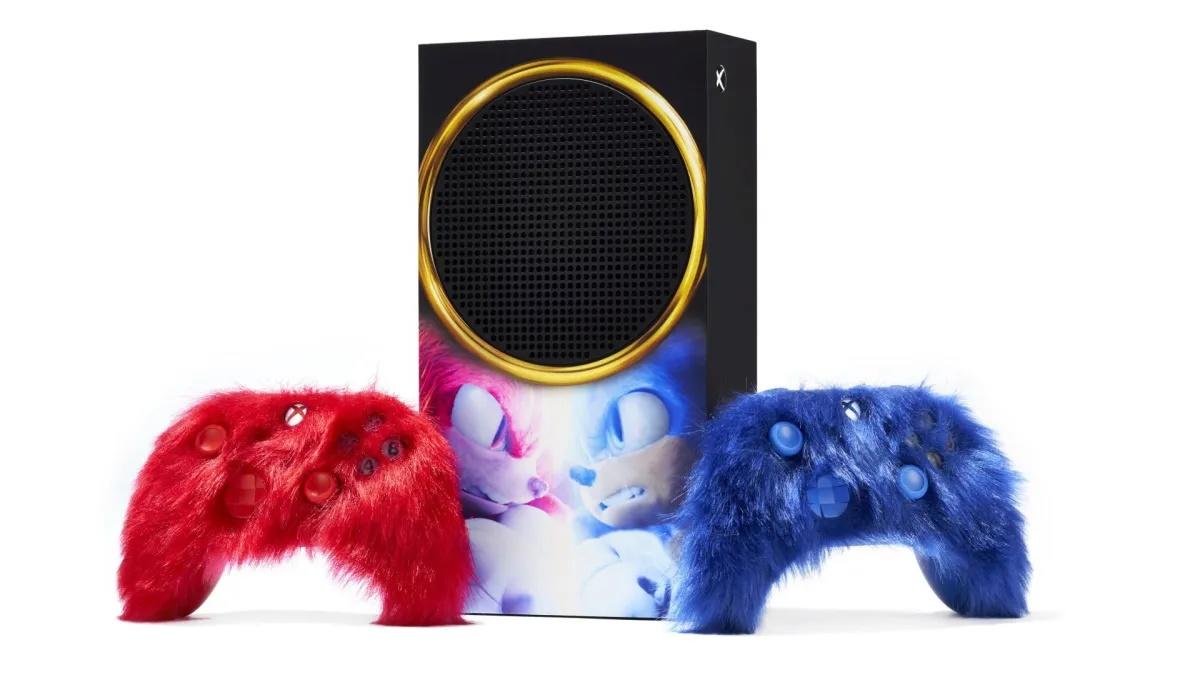 Xbox has announced that it has teamed up with [Paramount Pictures](/category/paramount-pictures/) to create and release a custom [Xbox](/category/xbox/) Series S console and Xbox wireless controllers inspired by [Sonic the Hedgehog 2](/category/sonic-the-hedgehog-2/) ‘s Sonic and Knuckles.The customized [Xbox Series S](/category/xbox-series-s/) includes a golden portal ring like in the movie around the circular vent on the side as well as an embossed logo and textured coatings.The controllers, however, are where things get a little wild as they come in red like Knuckles and blue like Sonic, but are quite hairy.

The custom console and controllers are being released as part of two enter-to-win sweepstakes from Xbox.”Fans can enter two sweepstakes for a chance to win the exclusive custom Xbox Series S and both the Sonic Blue and Knuckles Red Xbox Wireless Controllers by either (1) retweeting the official Xbox sweepstakes tweet and including the hashtag #XboxSonic2Sweepstakes, or (2) for fans in the US, by redeeming Microsoft Rewards points,” the official announcement states.

You can check out what the customized Sonic the Hedgehog 2 Xbox Series S console and Xbox controllers look like for yourself below:

We might need glasses because these controllers look fuzzy.— Xbox (@Xbox)

Follow and RT with [#XboxSonic2Sweepstakes] for a chance to win a Sonic 2 Xbox Series S Custom Console and Controllers.

“After settling in Green Hills, Sonic is eager to prove he has what it takes to be a true hero,” the synopsis of Sonic the Hedgehog 2 reads.”His test comes when Dr.Robotnik returns, this time with a new partner, Knuckles, in search for an emerald that has the power to destroy civilizations.Sonic teams up with his own sidekick, Tails, and together they embark on a globe-trotting journey to find the emerald before it falls into the wrong hands.”

[Sonic the Hedgehog 2](/category/sonic-the-hedgehog-2/) is currently set to release on April 8th.

The sequel will see the return of the principal actors from the original as well as Idris Elba as the voice of Knuckles and Colleen O’Shaughnessey as the voice of Miles “Tails” Prower.[Sonic the Hedgehog](/category/sonic-the-hedgehog-comicmovie/) , the original film, is currently available to purchase on home video, digitally as well as on Blu-ray, DVD, and 4K Ultra HD.

The film stars [Ben Schwartz](/category/ben-schwartz) as the voice of the eponymous hedgehog, [James Marsden](/category/james-marsden) as Tom Wachowski, a police officer that befriends Sonic, and [Jim Carrey](/category/jim-carrey) as Dr.Robotnik, the franchise’s classic villain and scientist.You can check out all of our previous coverage of the upcoming Sonic the Hedgehog movie sequel here.

What do you think about the custom Xbox Series S and controller? Are you looking to enter the two sweepstakes for yourself? Let us know in the comments, or feel free to reach out and hit me up directly over on Twitter at @rollinbishop in order to talk about all things gaming and movies!.

Wed Mar 23 , 2022
The Arizona basketball team escaped with an 85-80 win in overtime over TCU in the second round of the NCAA Tournament on Sunday night. Some were not pleased with how the Wildcats’ players handled the team’s postgame celebration, however. One site slammed the players for their postgame antics after the […]