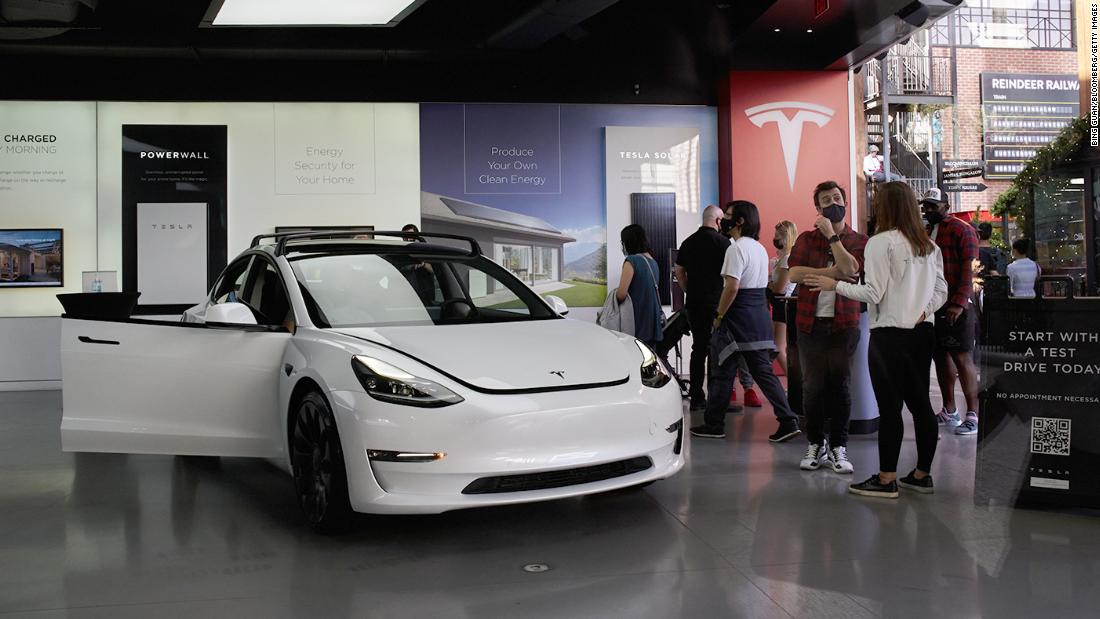 New York (CNN Business) Tesla bucked the industry-wide trend of reduced sales due to the shortage of computer chips and other parts , posting record sales in the fourth quarter, up 71% from a year earlier.

The strong fourth quarter of 308,600 vehicles gave Tesla full-year sales of 936,000, up 87% from the 2020 total, and above the 900,000 mark that had been the target set by many analysts.”Taking a step back, with the chip shortage a major overhang on the auto space and logistical issues globally these delivery numbers were jaw dropping,” Dan Ives, analyst for Wedbush Securities, said in a note to clients Sunday.He said Wall Street forecasts of 265,000 Tesla sales in the fourth quarter would have taken full-year sales to 892,000.The 900,000 sales target that Tesla easily cleared was a “best case number in the eyes of the street,” according to Ives.Other automakers are all expected to report reduced fourth-quarter sales when they release US numbers this coming week.Tesla reports only global sales, but industrywide, global auto sales are expected to be broadly lower in the fourth quarter.Cox Automotive is forecasting that overall US fourth quarter sales will be down 24% due to the shortage of computer chips that caused plants to temporarily shut , limited the inventory of vehicles in dealerships and drove up car prices to record levels.Read More “The industry ran out of vehicles, and sales stalled in the second half,” said Charlie Chesbrough, chief economist for Cox Automotive.

“Total sales in the second-half of 2021 were the slowest in a decade.Demand is healthy, but supply and production disruptions kept the industry in check.You can’t sell what you don’t have.” Tesla had its own chip shortage issues during the year but was able to manage through them.The EV maker’s achievement was more impressive considering that it is facing increased competition from traditional automakers now offering more electric vehicle models.For example, the Ford Mustang Mach-E had US sales of nearly 25,000 vehicles through November in its first year on the market.Ford recently announced plans to triple production to meet demand.

There are also new EV-only automakers now selling vehicles, including Lucid and Rivian , which both recently won MotorTrend’s car and truck of the year honors.So while Telsa’s share of the EV market might be declining somewhat in the face of new competition, the demand for EVs is growing even faster, allowing Tesla to continue to report strong growth.

“While there are many competitors in the EV space, Tesla continues to dominate market share as evidenced again this quarter while battling through the chip shortage,” Ives said.The next Tesla is proving hard to find Tesla has forecast that with new factories near Austin, Texas, and Berlin about to start full-scale production in 2022, it should have annual global sales growth of 50% or better for at least the next few years.Investors have rewarded Tesla, lifting its share price 52% in 2021.While that’s modest compared to the 743% gain shares achieved in 2020, it was still better than most automakers, including most other EV-only companies.

And it was enough to give Tesla a market value greater than the combined value of the 12 largest global automakers , and to make it only the sixth company ever to be worth more than $1 trillion ..

Tue Jan 4 , 2022
The Verizon and AT&T CEOs denied a request to delay a rollout of 5G wireless services.”The question of whether 5G operations can safely coexist with aviation has long been settled,” they wrote.The transportation secretary and the FAA had previously raised concerns over aircraft interference.Get the latest tech trends & innovations […]