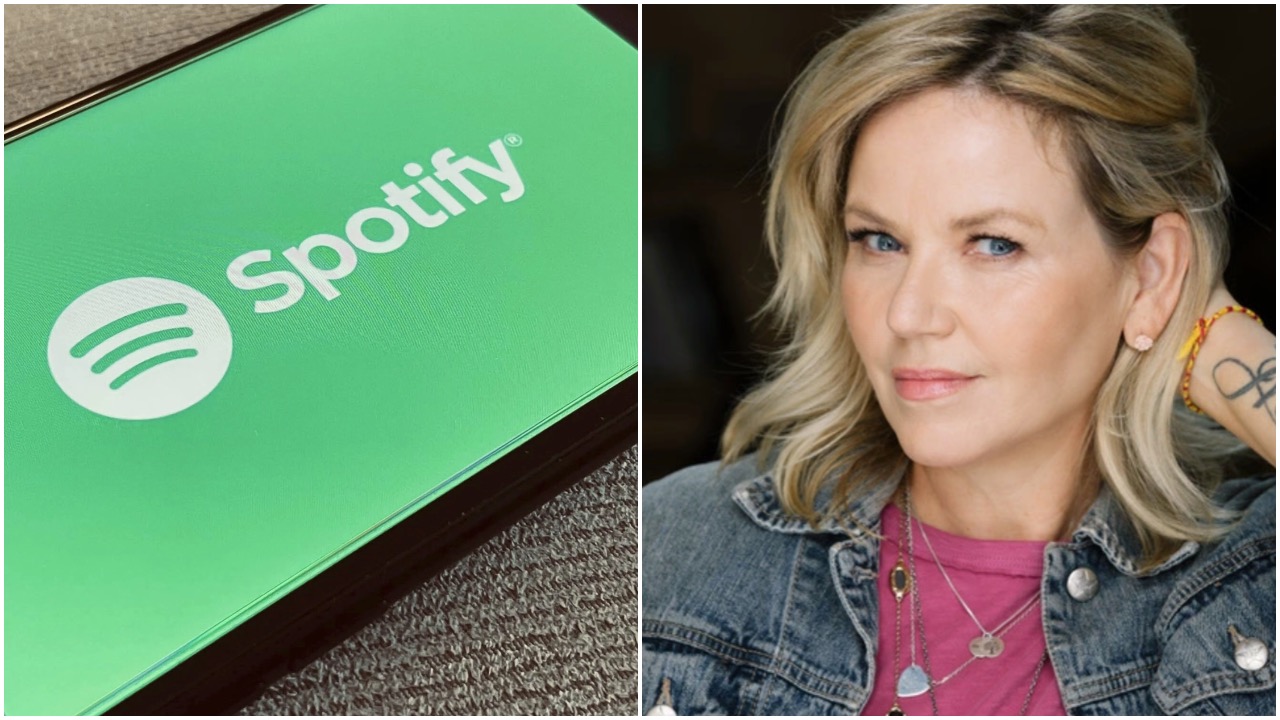 Serves You Right, Spotify: Why Some Musicians Are Happy the Heat Is On (Guest Column) Kay Hanley, frontperson for Letters to Cleo and co-founder of a songwriters’ activist group, writes for Variety about why musicians’ response to the Joe Rogan controversy makes her hopeful about other cries for change.

Latest In Defense of Alanis Morissette’s ‘Jagged Little Pill,’ by Letters to Cleo’s Kay Hanley (Guest Column) 3 years ago See All Kay Hanley , best known as the frontperson for Letters to Cleo and co-founder of the activist group Songwriters of North America (SONA), felt gratified when Spotify was put in the spotlight by some musicians who hadn’t weighed in before in the wake of the Joe Rogan controversy.She writes a guest column for Variety amplifying these thoughts:

“COME FOR THE ANTI-SCIENCE SMACKDOWN, STICK AROUND FOR THE WORKERS’ REVOLT.” — @DAYNAKURTZ

Thank you for your assistance, Mr.Rogan.The musicians will take it from here.

When Neil Young gave Spotify his now famous ultimatum that the streaming behemoth could either enjoy the right to distribute his music or give a global platform to traffickers of disinformation and casual hate, but they could not have both, the internet exploded with accusations that Young was stepping out of his lane and stoking the flames of a culture war.But it felt like a gift out of thin air, wrapped in a giant bow, impaled with a flashing neon sign screaming “USE ME STUPID!!!!” to musicians everywhere.Because after years of suspecting that Spotify was becoming increasingly hostile to our interests but feeling powerless to do anything about it, an opportunity we couldn’t have plotted or planned for just exploded into existence.

Now is our chance to seize the energy of a sideways moment and repurpose it to talk about the real problem: Spotify’s consistent pattern of exploitation, devaluation and disrespect of music creators.

When the #DeleteSpotify trend took hold on social media last week, I jumped in with giddy enthusiasm and loads of ammunition.Within minutes of my first tweets, I heard quite a bit of the usual “shut up and sing” stuff, which I always expect when I use my grown-ass woman voice.

But what I found frustrating was feedback from friends and peers suggesting that linking legitimate criticism of Spotify’s low rates and broken promises to music creators with the Joe Rogan situation was the wrong fight at the wrong time.

I disagree.Given everything we’ve seen and heard Spotify do in public, it is not surprising that they chose a fascism-curious jock over a beloved musician with 6 million listeners.Make no mistake, this is an easy choice for Spotify 2022.

The music business has never been especially kind to the music makers who seek their fortunes — or even a returned phone call — but even with weary skepticism fused into our collective backbone, Spotify’s appearance on the scene was sort of electrifying.Their current posture bears little resemblance to the company that seduced major labels, recording artists and fans alike with a convincing new vocabulary that deployed all the music-biz code words wrapped in the rehearsed omnipotence of Silicon Valley saviors.Spotify promised to re-monetize the music business, respect music creators and recapture our earnings, lost to outdated DMCA laws and rampant piracy by those other digital platforms.We bought Spotify’s pitch not because we’re stupid but, rather, because it was possible.It is possible.

My disdain for Spotify began in 2015.After seeing the economic disparity between radio play and album sales compared with audio streaming and YouTube playing out in real time on our royalty statements, I co-founded Songwriters of North America with my writing partner Michelle Lewis and Dina LaPolt, a music attorney whose first words to us when we walked into her office to talk about the digital decimation of songwriters’ livelihoods was: “Where the fuck have you bitches been? They’re eating you for lunch!”

A non-profit dedicated to protecting the value of songs was born.

Thanks to the hard work and passionate engagement of the people in SONA, I’ve had a front row seat to all kinds of palace intrigue, but for the purposes of this story, let’s stick to my observations about Spotify.

I recall feeling a sense of team-player spirit years ago when executives from Spotify would come to songwriter townhall events, asking for patience and a long leash on their despised “freemium” tier so the company could scale, after which time we’d all be stuffing hundred dollar bills in the barista’s tip jar and doing other rich people stuff, I guess.When they did in fact scale, they had a change of heart.Spotify began doing things like introducing pretty blatant pay-to-play-schemes involving artists forgoing royalties in exchange for a truly dystopian sounding “algorithm boost” or showing up in court to fight a Copyright Royalty Board ruling which gave songwriters a much needed raise from their scandalously low rates.Spotify won their appeal and our rate increase evaporated — and, apparently having enjoyed the experience so much, they will return to court in April, fighting to cut our rates even further.

The first time I used the hashtag #CancelSpotify was in 2018.

I think SONA invented it.I’m just saying, I’ve been screaming into the void about Spotify for a long time.

It’s really hard to organize creative people because everybody’s busy chasing creativity and trying to keep the lights on.From the days when I had to have big black X marks drawn on my hands in the ’80s to perform underage in rock clubs to my advocacy work with SONA, It’s been my experience that music workers are not motivated by money, and it’s been nearly impossible to get my peers fired up about terrible streaming rates.So even though everybody grumbles about Spotify, please believe there was no danger of us taking to the streets in protest.

Until now.An event that seems only tangentially related, but that in fact makes everything — the promises, the lies, moving the goal posts — so obvious.

And now people are pissed.

At some point, Daniel Ek decided he was done pretending to care about music and the people who made his company obscenely wealthy.Ek began telling artists it was unacceptable to release music only every three or four years while redirecting the billions he made off our music to invest in creepy defense AI and spending fuck-you money on podcasts.

During this same period, other steaming platforms and distribution options like BandCamp began emerging, slowly building the trust of music creators and fans by offering significantly higher rates and clever capitalization goodies for us, along with top notch-user experiences from enhanced audio tiers to comprehensive credits and liner notes.

Real quick: I do not want to leave the impression that if Spotify were out of the picture, we’d all be magically elevated into a music ecosystem of fair pay and equality.The streaming model of music delivery still has plenty of problems which can only be fixed by robust engagement by music creators and fans in alliance with forward thinkers at the digital service providers.

In a big ol’ free marketplace like this, digital music service providers will have to compete for our business.For the right to distribute our music and capture the listeners’ subscription dollars.When you think about it that way, why would anyone, especially artists, choose Spotify?

Besides being the frontperson for Letters to Cleo — the ’90s alt-rock band that has reformed for occasional live shows and recordings — Kay Hanley has developed a successful career writing and performing the themes for animated shows like “Doc McStuffins,” “Harvey Street Kids” and “DC Super Hero Girls: Sweet Justice.” She and writing partner Michelle Lewis are executive directors of Songwriters of North America, an organization of 200-plus professional tunesmiths that led the charge on the Music Modernization Act.

More From Our Brands Rolling Stone John McCain Literally Said ‘F–k It, Let’s Do It’ When Picking Sarah Palin: Book Robb Report Robb Recommends: A Custom Desk for a Private Jet That Takes 1,000-Plus Hours to Create Sportico U.S.Olympians at Beijing 2022 Would be Wise to Stay out of Trouble SPY Review: Can the $90 Wyze Video Doorbell Pro Compete With Amazon Ring and Google Nest? TVLine That ’70s Show Stars Tease Start of ’90s Show Production: ‘Red and Kitty, Teenagers, Grunge Rock…Let’s Go!’.

Crowded house: How the Sydney property takeover is pushing locals out