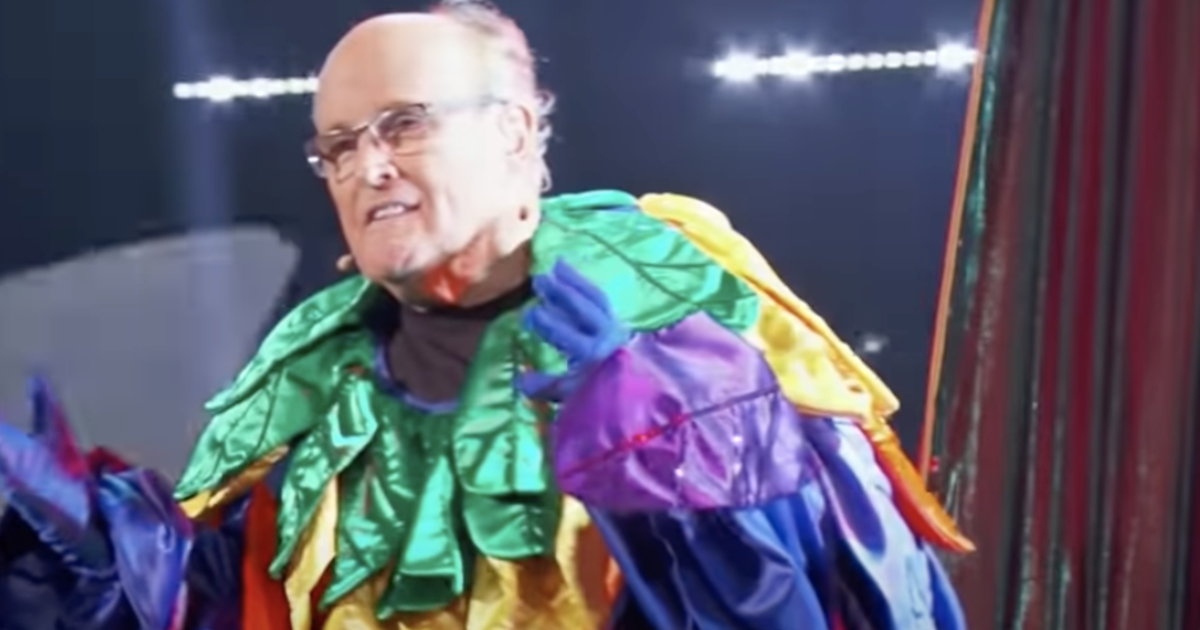 Viewers of “The Masked Singer,” may have already seen some spoilers about Wednesday night’s episode, when a controversial contestant, long rumored to be on the show, was eliminated.Rudy Giuliani was revealed as a contestant, and his final performance prompted judge Ken Jeong to walk off the stage, Entertainment Tonight reports.

The former mayor of New York City and President Donald Trump’s lawyer was voted off after singing “Bad to the Bone” by George Thorogood and the Destroyers – dressed as a jack-in-the-box.The singing competition show has celebrities wear elaborate costumes that cover their faces, so the judges and audience have no clue which stars are singing – until they are eliminated.

After Giuliani’s performance on Wednesday night, judges Robin Thicke, Jenny McCarthy, Ken Jeong and Nicole Scherzinger tried to guess who was inside the costume.They were stumped, guessing Al Roker, Robert Duvall and Elon Musk, among other stars.

But as the audience chanted, “Take it off,” Giuliani revealed himself.

Jeong was stunned, crossed his arms and essentially remained silent.It was previously reported that Jeong and Thicke walked off the set when Giuliani was revealed as the jack-in-the-box during the taping of the show in February.

Deadline first reported that the judges were shocked by the controversial contestant choice.

“With all of the controversy that’s surrounding you right now, I think it surprises us all that you’re here on The Masked Singer.'”

“Me too,” Giuliani said.He said he decided to go on the show show because of his granddaughter.

Once contestants are unmasked, they are invited to sing a final song.When Giuliani began, Jeong decided to protest.

“Yeah, I’m done,” he said, then walking off stage, confirming the rumors that taping ended in a the judge leaving.Only McCarthy and Scherzinger were shown dancing to Giuliani’s unmasked performance, and it appears Thicke also left the stage.

Giuliani and three others Trump associates — conservative lawyers Jenna Ellis and Sidney Powell, and former Trump White House aide Boris Epshteyn — pushed unsupported theories that the 2020 election was rife with fraud and appeared together for a November 19, 2020, press conference, during which they claimed Mr.Trump won in a “landslide.”

Giuliani’s New York City home was also raided by federal agents in August 2021.The former mayor, who served from 1994 to 2001, has been under the watch of prosecutors with the southern district of New York since 2019 over whether he broke lobbying laws in his dealings with Ukraine while working as former president Donald Trump’s personal attorney.

In October 2019, federal investigators were reportedly said to be looking into Rudy Giuliani’s business dealings with two associates who pleaded not guilty to campaign finance violations.

Fri Apr 22 , 2022
A man in protective gear rides a bicycle on the street in Shanghai, China, April 21, 2022.On April 20, the Jinshan and Chongming Shanghai suburban districts achieved the dynamic zero-COVID-19 goal.The number of cases has been trending downward over the past few days in other suburban districts.Meanwhile, some urban districts, […]