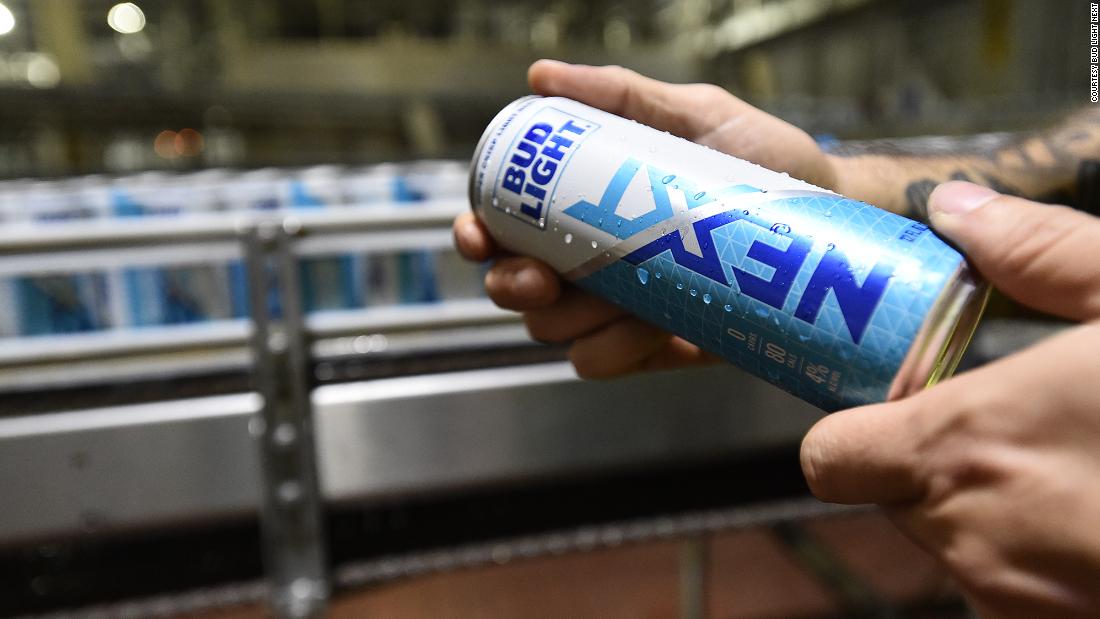 The new beer goes on sale nationwide February 7, about a week before the Super Bowl, traditionally one of the most popular days for beer consumption.Anheuser-Busch ( BUD ) is using the championship football game to help launch the new brand with an in-game ad that will “demonstrate what’s possible when there’s zero in the way.” Bud Light Next is the “next generation of light beer for the next generation of beer drinkers,” said Andy Goeler, vice president of marketing for Bud Light.The new beer, announced last summer, is aimed at younger consumers like Gen Zers who are looking for a similar nutritional makeup to hard seltzer along with the flavor of beer.Bud Light Next hits shelves on February 7.A 12-ounce serving of Bud Light Next is 4% alcohol by volume and 80 calories — that’s 30 fewer calories and about the same amount of alcohol compared to the original.But the big difference is in the carbs: Bud Light has 6.6 grams of in a 12-ounce serving, while Bud Light Next has zero.Read More Bud Light Next will be priced slightly higher than Bud Light.

When Next hits shelves, consumers will see the hallmarks of typical Bud Light packaging like the blue-and-white color scheme to remind fans the brand is in the “Bud Light family,” Goeler said.

The phrases “zero carbs” and “super crisp” are also prominent on the can.Beer bounces back Beer sales had been declining for much of the past decade, but the pandemic reignited consumer interest because of its affordability, brand familiarity and product innovations.NielsenIQ said that retail beer sales slipped 5.4% in 2021 compared to the year prior, perhaps not surprisingly since the pandemic triggered pantry stocking and sporting events and music concerts were largely canceled.Retail sales of light beers with a range of 0 to 5 carbs per serving, declined less than 1% in 2021, the firm said.That’s a smaller decline compared to the broader beer industry, making it an opportune category for growth.”It makes sense for alcohol companies to consider these trends when developing line extensions to keep core consumers engaged with their brands, and offer more choice for people looking for healthier options,” Brandy Rand, chief operating officer of the Americas at IWSR Drinks Market Analysis, told CNN Business.

Launching Next is “historic” for the nearly four-decade-old Bud Light brand, Goeler said.

“We’ve been working on it for 10 years, and it wasn’t until recently that brewing technology gave us the breakthrough to brew a beer with zero carbs.” The brewer developed about 130 prototypes before landing on the correct recipe.CNN Business toured the Cartersville, Georgia, facility where Bud Light Next is being brewed.Jennifer Logan, senior general manager of the plant, declined to give details about how the zero-carb beer is made, but said it was a “highly technical process” and that water is “one of the most important raw materials” for brewing beer.Logan described the crisp taste as a mix between elderberry and chamomile, with a fruity aroma.”The body is very thin, as you would expect being a zero-carb beer,” she said..

Fri Jan 28 , 2022
McDonald’s is introducing social media menu hacks to official menus.An analyst says it’s a smart way to expand menus without adding complexity.The chain simplified menus in the beginning of the pandemic.Get a daily selection of our top stories based on your reading preferences.Loading Something is loading. Email address By clicking […]