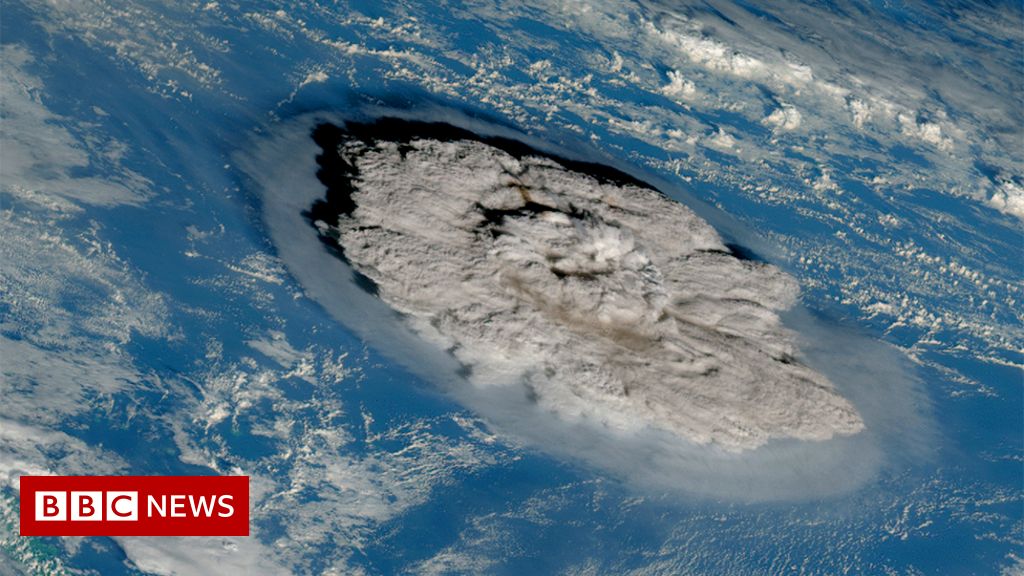 Why satellites are key to understanding Pacific volcano By Jonathan Amos

To play this video you need to enable JavaScript in your browser.Media caption, Watch: Satellite images capture the eruption of Hunga Tonga-Hunga Ha’apai When an enormous underwater volcanic eruption occurred in the South Pacific near Tonga on Saturday, satellites were in position to capture what had happened.

That’s because there’s a large and growing fleet of Earth observation spacecraft overhead.Some have constant eyes on particular regions of the Earth, meaning their data is immediately available to study, while others are tasked with making follow-up observations.

All of the information these satellites gathered will aid the emergency response, and help scientists better understand the event.

The weather satellites There are a group of spacecraft that monitor weather systems from 36,000km (22,370 miles) above the Earth.They scan an entire hemisphere every few minutes, relaying images of what they see to the ground to inform up-to-date forecasts.

It was these meteorology satellites that recorded some of the most spectacular views of the volcano’s ash cloud as it climbed high into the sky.

This shows data from all three weather satellites covering the area.From left to right: Korea’s GK-2A, Japan’s Himawari-8 and the US GOES-17.

Fascinating to see the different perspectives.pic.twitter.com/aB02QaayWx

— Simon Proud (@simon_sat) January 15, 2022 The BBC is not responsible for the content of external sites.

View original tweet on Twitter During an eruption, the outpouring of ash makes it difficult to see what’s actually happening at ground level – unless you use radar technology which penetrates ash and cloud.

When the EU’s Sentinel-1A flew over the volcano late on Saturday, it was clear much of the edifice that stood above the waters of the Pacific Ocean had been destroyed.

The volcanic island is almost completely wiped out

— Copernicus EU (@CopernicusEU) January 16, 2022 The BBC is not responsible for the content of external sites.View original tweet on Twitter But radar pictures can be quite hard to interpret if you are not used to looking at them.

So consider these more familiar views of the volcano obtained by the San Francisco-based Planet company.

One of the images was acquired just a couple of hours before the eruption.Compare it with the above radar data, and you’ll be better able to grasp the ferocity of the blast.

— Will Marshall (@Will4Planet) January 16, 2022 The BBC is not responsible for the content of external sites.

View original tweet on Twitter A global shockwave One of the most stunning aspects of the weather satellite views is the shockwave that moves out rapidly in all directions.This pressure wave from the explosive eruption covered the entire globe.

The UK Met Office recorded its passing on barometers, not once but twice.

Our atmosphere acts as a fluid, like dropping a pebble in a still pond and seeing the ripples.

A UK pressure trace for the past 24 hours shows how our atmosphere continues to see those ripples since the first pressure wave from the #Tonga eruption arrived on Saturday evening.pic.twitter.com/rr0xBONe4v

— Met Office (@metoffice) January 16, 2022 The BBC is not responsible for the content of external sites.

View original tweet on Twitter The high resolution pressure trace at @UniRdg_Met tonight is very reminiscent of barogram signals from Krakatoa in 1883, in the @royalsociety report of the Krakatoa [email protected]_weather @ed_hawkins @SimonLeeWx .pic.twitter.com/sEzmalOW1i

— Giles Harrison (@swshargi) January 15, 2022 The BBC is not responsible for the content of external sites.View original tweet on Twitter Another good example of the volcano’s impact on the atmosphere can be seen in the data retrieved by the European Space Agency’s Aeolus mission.

This satellite measures wind properties from the ground up to a height of 30km in the stratosphere.It does this by firing down an ultraviolet laser, but as Aeolus passed over the Pacific its light beam was blocked by all the material thrown into the sky.

It did, however, give us a good indication of the height of the ash cloud.

— Michael Rennie (@MikePRennie) January 16, 2022 The BBC is not responsible for the content of external sites.

View original tweet on Twitter Effects on the climate The biggest eruptions can act to cool the climate for a short period.

The Philippines’s Mount Pinatubo eruption in 1991 famously dropped Earth’s average global temperature by half a degree for a couple of years.The chief way volcanoes do this is by injecting vast quantities of sulphur dioxide into the atmosphere.SO2 combines with water to make a haze of tiny droplets, or aerosols, that reflect incoming solar radiation.

The EU’s Sentinel-5P satellite can map the quantity and spread of sulphur dioxide.Early indications are that the mass of injected SO2 is not enough to have a significant impact of global temperature.

Apropos of something, this graph (red line) gives some insight into the impacts of 3 large volcanoes in the global temperature record since 1950 (after subtracting the sometimes confounding affects of ENSO).pic.twitter.com/Jrw0yamlLw

— Prof.Simon Carn (@simoncarn) January 16, 2022 The BBC is not responsible for the content of external sites.View original tweet on Twitter Mapping the damage The extent of the damage across the Tongan archipelago is still unclear.

Inhabitants have had to deal with ash fallout and the flooding that resulted from tsunami waves.High-resolution satellites are now being tasked to map the many islands in the region, to help direct the emergency response to those places with the most urgent needs.

Tonga tsunami, quite impressive that it propagated all the way to stations in the coast of Mexico (Manzanillo over 1.4m) and California…Here is a order one attempt to model this tsunami @geosmx #geoclaw pic.twitter.com/drzz5GMHJK

The work plan is to use PlÃ©iades VHR optical ğŸ›° that will be acquired today 16 Jan.at 21:50UTC

— Copernicus EMS (@CopernicusEMS) January 16, 2022 The BBC is not responsible for the content of external sites.

— Stef Lhermitte (@StefLhermitte) January 17, 2022 The BBC is not responsible for the content of external sites.View original tweet on Twitter More on this story New Zealand sends flight to assess damage on Tonga

Tue Jan 18 , 2022
I tried the Jet, a luxury bus startup that travels between New York City and Washington DC.Tickets start at $99, which is more expensive than a comparable Amtrak ticket or a ride on a budget bus service.The snacks, drinks, kind attendant, and comfortable motion-canceling seating made my carsickness worth it.I […]