Honda and GM will co-develop a line of affordable electric compact SUV models.They will share platforms and new battery technologies that could include solid-state batteries.We can expect these models to arrive in the U.S.starting in 2027.We already know that Honda will use GM’s EV platform for two upcoming electric SUVs coming in 2024.But that won’t be the end of the two automakers’ partnership , as they have just announced a massive expansion of their plans.GM and Honda now say they will co-develop a lineup of affordable compact crossovers set to launch in 2027 with new battery technologies.

The companies clearly have high sales ambitions for these vehicles, as they cite manufacturing plans that will “enable global production of millions of EVs.”

Future EV Models 2024 Honda Prologue Will Be a New EV SUV Model 2024 Chevy Equinox EV Will Start at around $30,000 Acura’s Electric SUV May Bear the Name ADX These new models will use a common platform and share new battery technologies that the two companies are exploring, such as solid-state batteries and materials such as lithium-metal and silicon.Due to their affordability bent, we can assume that these compact SUVs will wear Chevy and Honda badges at first, but they may expand into GM’s more upscale Buick , Cadillac , and GMC brands as well and could also result in a product for Honda’s Acura luxury division.

These new models will be smaller and cheaper than the previously announced 2024 Honda Prologue and its Acura spinoff, which could be called ADX .These vehicles, launching in about two years, are expected to use a version of the Ultium platform that will be similarly sized as the mid-size Cadillac Lyriq electric crossover that has already begun production.

2024 Chevy Equinox EV Chevrolet Both GM and Honda say they are working to achieve price parity between EVs and existing gasoline models, and that a key mission of this project is to drive down the cost of electric vehicles so that they can sell in higher volumes.GM, for its part, is currently way ahead of Honda towards achieving this goal; it already offers the Bolt , starting at $32,495, and has announced plans for an Equinox EV coming next year that it claims will start around $30,000.GM also claims it will later launch an EV to slot in below the Equinox EV price-wise.Honda, meanwhile, does not currently sell an EV model in the U.S.at all but has shown EV concepts (pictured at top) for various global markets.

Honda Collabs Honda and Sony to Team Up on New EV Brand Honda Reveals Details on New EV Lineup for China Honda also says that it is developing electric models on its own platforms, but won’t share where these vehicles will fit in with the GM partnership.

If we were to guess, we’d think that Hondas own EVs may take the form of smaller hatchbacks and sedans rather than the SUVs it will build with GM.The company does currently sell the tiny Honda e hatchback abroad but has no plans to bring this vehicle to the U.S.

Honda also recently announced that it plans to establish a new EV brand with Sony , so we’re not sure how that fits in with these new plans with GM.

Look for more information to come within the next few years as we find out more about GM and Honda’s growing collaboration in terms of production, technology, and where these new EVs will fit into the automakers’ respective lineups.

Wed Apr 6 , 2022
Arroyo asks Pampanga voters to give landslide win to Duterte-Carpio For Pimentel, a new method of conducting surveys may have been utilized amid the COVID-19 pandemic which may have not reached the masses. “I’ve lost my trust on surveys.Number two, this is pandemic times, there must have been a new […] 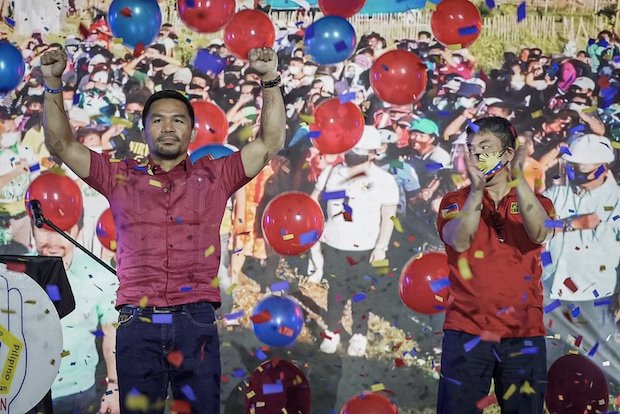