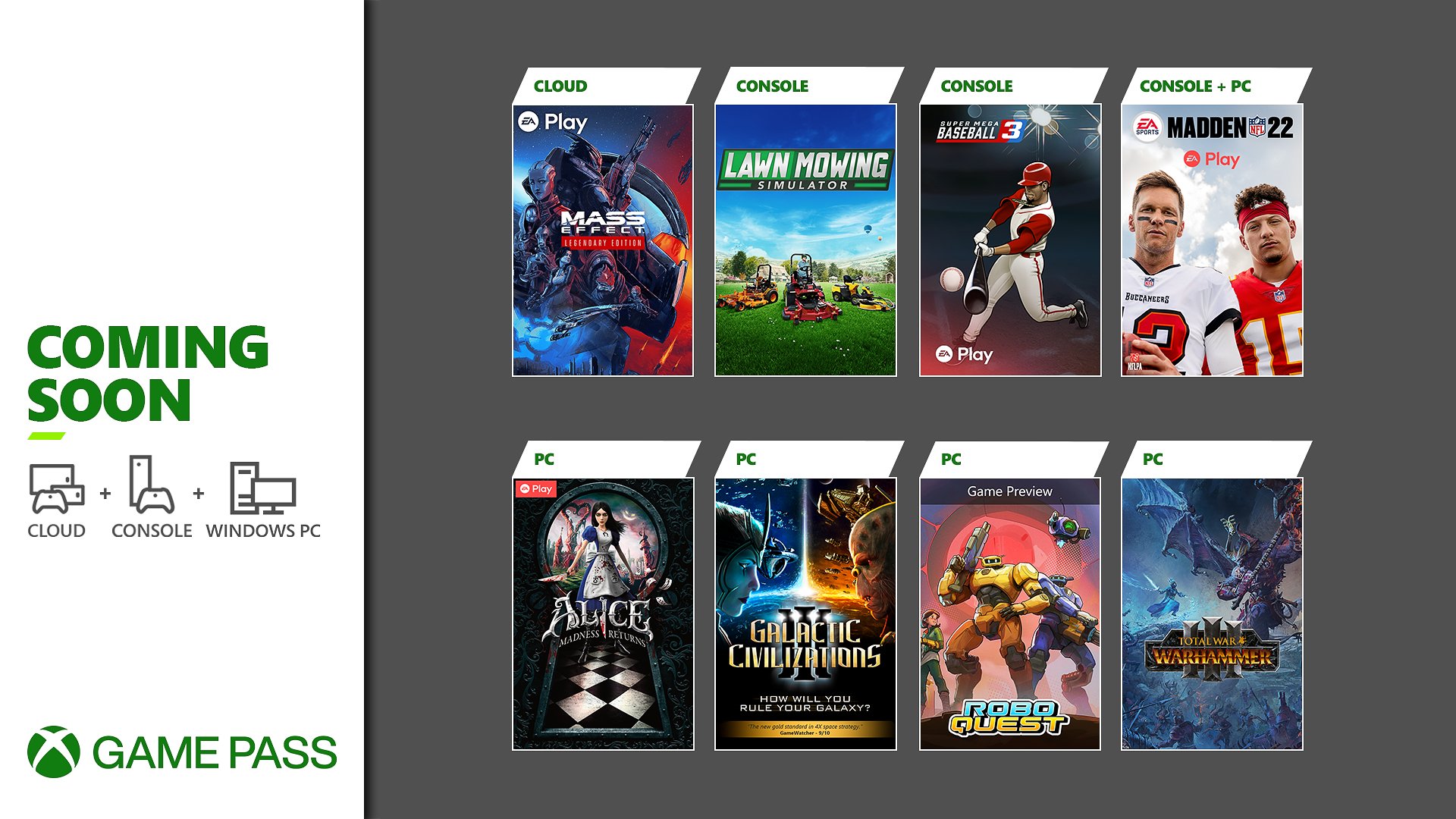 Xbox Game Pass Coming Soon to Xbox Game Pass: Total War: Warhammer III, Madden NFL 22, and More by Megan Spurr, Community Lead, Xbox Game Pass • Feb 15, 2022 @ 6:00am Click to share on Twitter (Opens in new window)Click to share on Facebook (Opens in new window)Click to share on Email (Opens in new window) Don’t mind me, just bringing more games to the Game Pass library! We’re closing out February with some games from our friends at EA, as well as some PC games to work out those mechanical keyboard muscles.Let’s look at what’s coming soon! Available Today Mass Effect Legendary Edition (Cloud) EA PlayThe Mass Effect Legendary Edition is now available with Xbox Cloud Gaming (Beta), via EA Play! The Legendary Edition includes single-player base content and over 40 DLC from the highly acclaimed Mass Effect, Mass Effect 2, and Mass Effect 3 games, including promo weapons, armors, and packs.Coming Soon Lawn Mowing Simulator (Xbox One) [email protected] – February 17Available now for PC and Xbox Series X|S and coming soon to Xbox One! Take a break from the real world and enjoy the challenge and serenity of mowing the Great British countryside in Lawn Mowing Simulator.Madden NFL 22 (Console and PC) EA Play – February 17Madden NFL 22 is coming soon to PC Game Pass and Ultimate via EA Play, allowing members to get on the field and play on the platform of their choice.Plus, claim recurring member rewards like Ultimate Team Packs and gear sets for The Yard and save 10% on purchases of EA digital content like games, Madden Points, and more.Total War: Warhammer III (PC) – February 17Available on day one with PC Game Pass: The cataclysmic conclusion to the Total War: Warhammer trilogy is coming.Rally your forces and step into the Realm of Chaos, a dimension of mind-bending horror where the very fate of the world will be decided.Will you conquer your Daemons… or command them? Check out the achievements you can earn to boost your Gamerscore.

Roboquest (Game Preview) (PC) [email protected] – February 22A fast-paced FPS roguelite playable in solo or co-op.Set in a scorched future world, you battle against hordes of deadly robots in high octane gameplay.Your high-powered, hyper-mobile Guardian is ready to fight through ever-changing environments fuelled by an adrenaline-pumping soundtrack.Galactic Civilizations III (PC) [email protected] – February 24Build a civilization that will stand the test of time and take the galaxy by storm in the largest space 4X strategy game ever.Choose from dozens of unique races and make a name for yourself through diplomacy, espionage, technological advances, and much more.Super Mega Baseball 3 (Console) EA Play – February 24Run up the score in a relaxed slugfest or push the limits of your reflexes in this refined baseball simulator that’s perfect for rookies and pros alike.The third entry in the series features all-new Franchise, Online Leagues and Practice modes, plus improved graphics and on-field additions! Alice: Madness Returns (PC) EA Play – February 28Coming soon to PC Game Pass & Ultimate via EA Play! Alice: Madness Returns delves deep into the dark and violent side of the imagination, creating nightmarish Wonderland where Alice must face the demons that haunt her visions.In Case You Missed It Battlefield: Bad Company 2 (PC) EA Play – Available nowGet ready for an intense and action-packed single-player campaign and intense multiplayer battles featuring the rag-tag squad known as Bad Company.

Operate tanks, attack helicopters, armored personnel carriers, and other vehicles across fully interactive landscapes that you can destroy or use for cover.Peggle Nights (PC) EA Play – Available nowThe ultimate Peggle test! Shoot and clear the orange pegs from 60 wild, dreamscape levels and bask in Extreme Fever glory.Meet the Peggle Masters’ alter egos and wield 11 Magic Powers, then try the ultimate Peggle test — 60 Grand Master challenges! DLC / Game Updates Grounded Reaches 10 Million PlayersThe Grounded team has announced that over 10 million players have visited the Backyard! Check out their announcement on Xbox Wire to learn more about the Into The Wood update and the road ahead to 1.0.Sea of Thieves: Shrouded Islands – February 17Set forth on the first of Sea of Thieves’ new time-limited Adventures on February 17! Meet the enigmatic Belle and help her investigate the sinister fog engulfing Golden Sands Outpost as the next chapter in the Sea of Thieves story starts to unfold.

Xbox Game Pass Ultimate Perks Whether you’re a Spartan trying to refresh your armory, or just want to kick back and stream some quality entertainment, we have you covered with this new batch of Perks.

Eternal Return (PC): Season 5 Special Pack – February 17More characters to master and some Skins to make them look even cooler! What’s not to love? Unlock 3 Characters, 3 Skins, some A-Coin and XP Boosts, and the special Midnight Shinobi Yuki skin! Everything you need to leave your mark on Lumia Island! Xbox Touch Controls Added to Six More Games Ultimate members, we’ve added Xbox Touch Controls to six more games ready to play from the cloud today! Play over 100 touch-enabled games with cloud gaming on the Xbox app for Windows PCs, Xbox Game Pass mobile app on Android devices, or Xbox.com/play on your Windows PCs and Apple phones & tablets, no controller needed! DreamscaperFirewatchLakeThe PedestrianYakuza 3 RemasteredYakuza 4 Remastered Leaving February 28 The following games are leaving the Game Pass library soon.Before they go, be sure to jump back in to play for a proper farewell! Remember to use your Game Pass membership discount to save up to 20% to keep them in your library.Hypnospace Outlaw (Cloud, Console, and PC)Killer Queen Black (Cloud and Console)Stealth Inc 2 (Cloud and Console)Touhou Luna Nights (Cloud, Console, and PC) Additionally, Titanfall will be leaving EA Play for Console and PC on March 1, 2022.Learn more here.