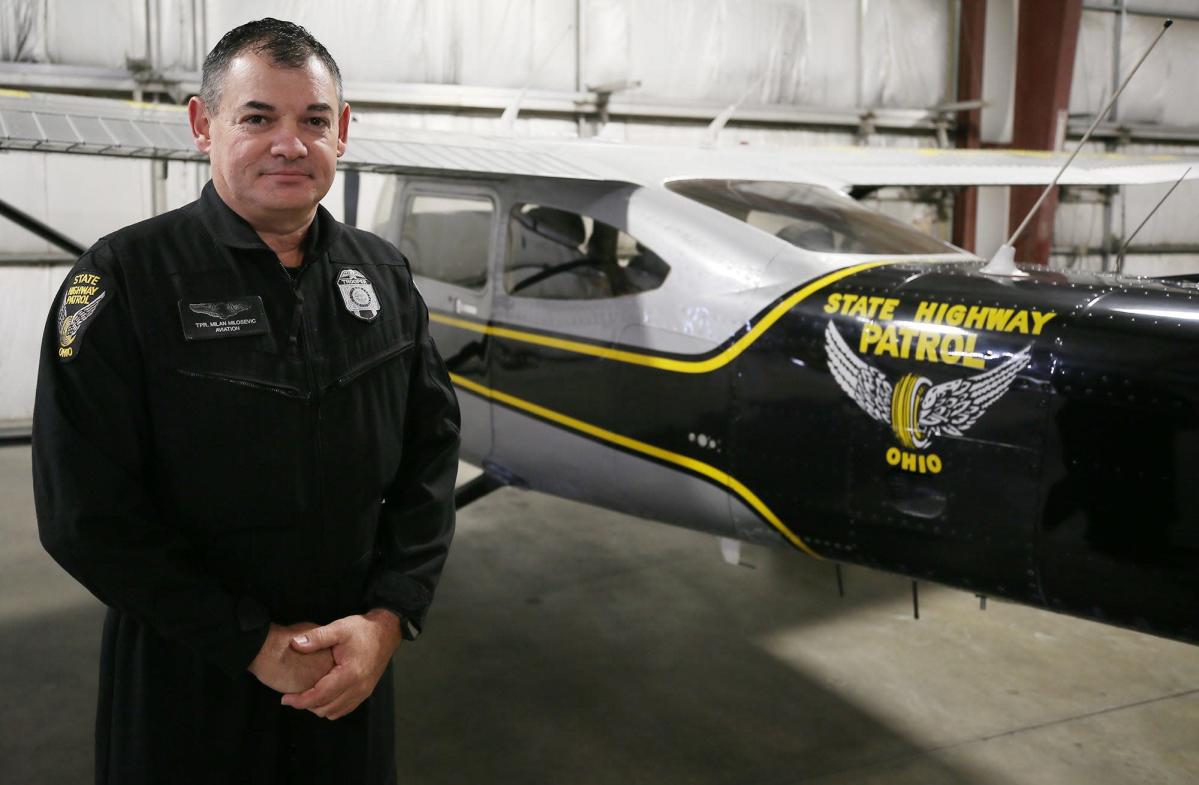 The short white lines on the side of the highway are easy to miss, as they’re painted in quarter-mile intervals and zip by when passed at speed.They go by even faster if you’re speeding.

They’re soon to be a thing of the past, as the Ohio State Highway Patrol’s aerial enforcement unit shifts to digital technology.By the end of the year Highway Patrol pilots will be able to help local law enforcement catch speeders on any road in the state.

For the past 11 years, state Trooper Milan Milosevic has patrolled Northeast Ohio in a Cessna 182 Skylane on most days suitable for flying.He covers the region from his base at the Akron Fulton International Airport as part of the patrol’s aviation section.The section includes 11 uniformed flight crew personnel, three helicopters and 13 airplanes.It coordinates with troopers on the ground, as well as local law enforcement agencies to conduct speed enforcement, among other missions.

Milosevic said the quarter-mile markers are easy to spot from 2,000 feet up.Speeders stand out, and he uses a timer to calculate their progress between the marks.

Milan Milosevic, an Ohio State Highway Patrol aviation trooper, pilots this Cessna 182 Skylane from his base at the Akron Fulton International Airport.Once he verifies their speed — generally around 20 mph over the limit — he paces them and radios the vehicle description to police on the ground.

A recent focus has been the construction zone on Interstate 77, where the patrol said 90 motorists were cited during targeted enforcement totaling 10 hours over several months.

Cited in construction zone: Nearly 90 motorists cited by highway patrol during aerial enforcement on I-77 in Coventry Township

She was passing on the berm,” he said.

He later found out the car was “full of kids” and the woman driving told the trooper on the ground she was late getting to Cedar Point.

“I look for people who are pulling away, catching up to traffic, weaving in and out,” he said.”It’s just the stuff that I see that the trooper on the ground can’t see.”

Story continues Milan Milosevic, aviation trooper with the Ohio State Highway Patrol, sits in the cockpit of his Cessna 182 Skylane.

From ground to air Before taking to the air, Milosevic served about 10 years in a cruiser, rotating between day, evening and midnight shifts.

“After a couple of years of working midnights, putting my kids through school, getting into pursuits, getting into resistings, my body wasn’t healing like it used to after a fight,” he said.

He said the patrol has several divisions that qualified officers can join, such as K-9, SWAT and aviation.He chose to get his pilot’s license, going through flight school at Akron Fulton Airport.He then trained with the patrol’s aircraft before landing a slot with the aerial enforcement division.

“We do missing persons, our bread and butter is speed enforcement, but we also do pursuits.We’ll fly over a pursuit where people are exiting a vehicle and running,” he said.Other missions include surveillance with agencies such as the Drug Enforcement Administration, where “controlled buys” of drugs are monitored by air.

“My favorite thing is a lot of people hate these motorcyclists who are driving aggressively,” he added.”We don’t get into chasing them …

When I’m up there, they’re not getting away.There’s only so many turns they can make.”

Milosevic said he caught a total of 37 aggressive bike riders in one year.

“It’s easier for me to watch where they’re going,” he said.

One rode so long that he ran out of gas and was caught at a gas station.Another, who Milosevic said knew he was being tracked by air, led police to a home where stolen motorcycles were being taken apart for parts sales.

“He knew I was up there.He went back to a house, into the garage.I was doing circles over the residence there making sure he wasn’t running out the back door.

The sheriff’s department and Akron police showed up.In that residence, they found six other stolen motorcycles,” he added, explaining the machines were in various stages of disassembly for sale of their parts.”He led us back to his chop shop.”

Milosevic arrives at work every day, checks the weather and then contacts the various posts and police agencies he’s scheduled to work with.

“Usually it’s set up in advance,” he said.

He lists the areas he is responsible for: most of Northeast Ohio including Lorain, Elyria, Medina, Ashland, New Philadelphia, Dover — all the way to Pennsylvania and Ashtabula.

He can be anywhere in the region within about 25 minutes, depending on the wind.

For the past 11 years, state Trooper Milan Milosevic has patrolled Northeast Ohio in a Cessna 182 Skylane.New technology coming Right now, Milosevic uses a push-button timer to clock speeders and a digital camera to take photos of accident scenes and other evidence.

“I’ll slow down the plane and bank it to the side,” he said, holding an imaginary camera up to his eye.

Things will be different next year.

Sgt.Ray Santiago, Ohio State Highway Patrol public information officer, said new equipment, which requires a crew of two troopers in the plane, is now being used in Franklin County, and statewide deployment of the “aerial speed measurement system” is expected by the end of the year.

“We started developing it last year and testing it.We’re one of the very few law enforcement agencies in the country that are going to be using it,” Santiago said.He pointed out that aerial speed enforcement is currently only possible over designated speed zones, with quarter-mile markings.

“The new equipment that we have, using GPS, it’s all tracked.

Franklin County was picked to test the equipment because it’s central and has a high volume of traffic.Santiago said the patrol will be analyzing crash data to determine where to target aerial enforcement efforts with the new equipment once it is deployed statewide.

Another consideration is establishing court decisions that will enable the new technology to stand up to scrutiny.

As the new system is rolled out, the patrol will be identifying high-crash areas across the state that are outside marked speed zones.

“These more dangerous areas, they have grades going into them, they go up and down, they have turns,” he said.”Those two pilots that are in the air can pretty much do the job of four to six troopers on the ground because there’s so much they can see.”

For example, some drivers speed on roads where there are narrow shoulders, which makes traffic enforcement difficult as there is nowhere to pull violators over.With aerial assets, violators can be tracked and then stopped by ground units where it is safe.

Summit County resumes aerial enforcement Lt.Karla Bloomingdale, head of the traffic division for the Summit County Sheriff’s Office, said that after not using aerial assets for some time, the county began working again with the highway patrol’s aerial unit in 2019.

“We’ve seen increased effectiveness in our traffic stops,” she said.”We are catching folks at much higher speeds, and we’re working heavily in our construction zones to try and keep the workers safe and get people to their destinations.

She said staffing is a consideration in using air assets, because officers have to be put on special assignment to work with Milosevic.

“However, we do get traffic grant funding from the state,” she said.“We’ll usually set up a detail in advance so that there is plenty of staffing available that can go and hit certain areas to try and keep some of the problem areas safer.”

She said the office’s recent focus has been construction areas in and around Akron, where the highway system is being rebuilt in phases.

Though traffic stops are not made inside the zones, deputies are waiting down the road for unsafe motorists who are spotted from the air. 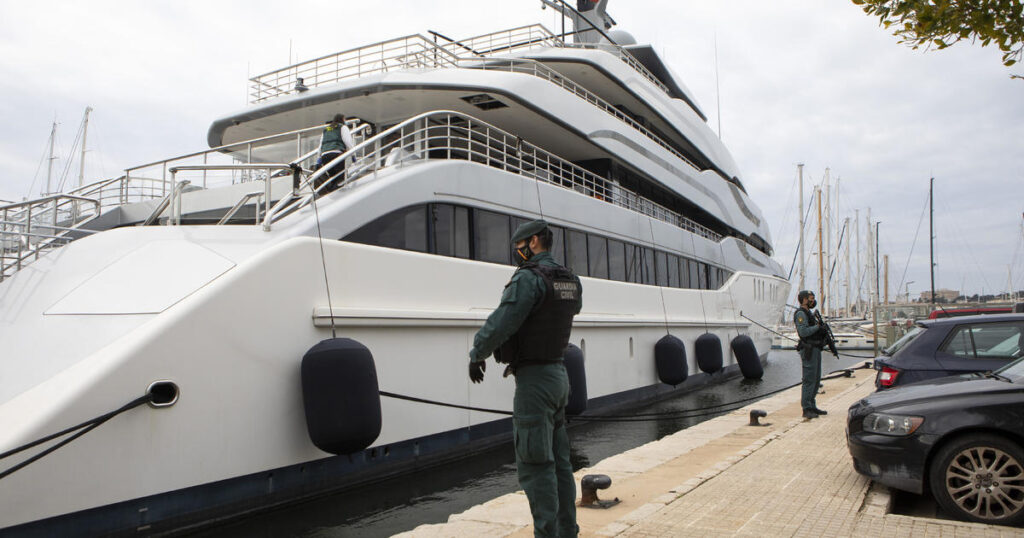