Last November, Todd Howard, the executive producer of Bethesda Game Studios, sat down with IGN to reflect on the 10th anniversary of “Skyrim,” one of the best-selling video games of all time — and a game that tens of thousands of people are still playing every day.

“We just feel incredibly blessed to still have it in our lives,” Howard said, as he sat in front of a re-creation of Alduin’s Wall, a mural in “Skyrim” that illustrates the canonical beginnings of the game’s world.“One of the reasons we’re sitting here 10 years later is because of our modding community and what they’ve done with the game.”During the game’s life span, Bethesda provided users with tools to construct their own new settlements and invent original storylines using “Skyrim” as the scaffolding for their own adventures.The process, known commonly as modding, is usually a passion project by fans who add new elements to a game, infusing it with new life long after its initial release.A decade after “Skyrim’s” debut, some of the game’s most prominent modders are now on their own real-world adventure, landing jobs in the video game industry as full-time game developers.Bethesda’s “modding community” is composed of a loose grouping of “Skyrim” fans who have spent thousands of hours modifying and releasing updates to the world of “Skyrim” and other Bethesda Games.

For years now, Bethesda, a 35-year-old game publisher known for immersive, role-playing adventures, has encouraged fans to build on top of the virtual worlds they create.The developer allows fans to change every detail in “Skyrim” — from the sprouts of creekside flora to the northern lights that illuminate the night sky — with what’s called the creation kit, which includes a version of the same tools the developers used to create the in-game world.

‘Starfield’: Todd Howard discusses Bethesda’s new space-based RPG “ The Forgotten City ,” a time-looping adventure set in Ancient Rome, was originally a murder-mystery mod for “Skyrim” that’s been downloaded 3.8 million times, according to the creator Nick Pearce.Pearce left his career in law to pursue game development after releasing the first version of “The Forgotten City,” which was nominated for a Game Award in the category of best debut indie game of the year.“I’d never have had the opportunity to become a game developer if it wasn’t for modding,” Pearce wrote in an email to The Washington Post.“Sometimes people ask me if I’d like to go back [to my old job], and I just smile and laugh.I’m so much happier now.”It’s hard to say exactly how many people are still logging into “Skyrim” these days.

Part of the challenge here: “Skyrim” is omnipresent in gaming.There’s a version of “Skyrim” for virtual reality headsets , one each for the past three generations of PlayStation and Xbox consoles, and another the Nintendo Switch .You can even play “Skyrim” on Amazon’s Alexa.(Jeff Bezos, the founder of Amazon, owns The Washington Post.) One five-star review of the Amazon add-on simply wrote “Todd Howard is an actual madman.” At a gaming conference in 2018, Howard reportedly said of the title: “If you want us to stop releasing it, stop buying it.”A spokesperson for Bethesda wouldn’t disclose how many people are playing their games, but, in a recent interview , Howard told The Guardian that millions of people play “Skyrim” every month.Emmi Junkkari, a Finnish game developer who does contract work for Bethesda, says “Skyrim” is still popular a decade later because “you can be anything you want in the game.” You create your character, decide how they look, give them a name and think up your own story within the game.All the modifications fans have released for “Skyrim” only add to this sense of free will, Junkkari said.“You just don’t run out of things to do and ways to play,” Junkkari added.Junkkari, 36, is a member of Bethesda’s Creation Club , in which the company pays freelance artists and developers to create downloadable content for “Skyrim” and other games.Before Junkkari started working as a freelancer for Bethesda, she was as a grocery store clerk.

Now, she is a co-founder of an independent game studio, Forbidden Studios , and is designing a survival role-playing game that’s based on Finnish and Nordic folklore.“I never found my place until I became a video game developer,” Junkkari said.“Once I started modding, I realized that creating beautiful locations in games was something I had a unique talent for.”Not all mods are the same.Junkkari is known for creating and enhancing the homes in “Skyrim,” which act as safe havens in the game for players to organize the loot they’ve collected.Other mods can improve on the game’s menu system or map, making it easier for players to navigate the world.Some mods are just for the memes — a good laugh that mashes together a chaotic composite of the Internet.Late one night in college back in 2013, Kevin Brock released a mod r eplacing the dragons in “Skyrim” with the character Thomas the Tank Engine.

The swap turned into a viral meme , as fans and famous YouTube creators like Felix “PewDiePie” Kjellberg played the altered game with fire-breathing locomotives.Brock’s mods for “Skyrim,” produced under the moniker “Trainwiz,” helped him land a job in game development at Human Head Studios in Madison, Wisconsin.Brock says the mods were a great conversation starter in the interviews.

The most anticipated video games of 2022 Popular modders are able to find jobs in the gaming industry because they’ve proven they can design features fans want to add to their game, says Alex Velicky, a design lead at Bungie, the developer behind the popular multiplayer franchise “Destiny.” Velicky would know — he got his job at Bungie after he created an entire island for “Skyrim” with a full cast of voice actors, which has been downloaded more than 3 million times.Growing up, Velicky always used to build miniature campaigns in “Age of Empires 2” and “Timesplitters 2,″ but Bethesda’s creator kit for “Skyrim” and “Oblivion” — an earlier title set in the same world 200 years before the events in “Skyrim” — felt like the first time he could really build anything in a game.“I [could] just do whatever I want and that really blew my mind,” Velicky said.“I didn’t feel like the tools were limiting me.”At Bungie, Velicky says the company compares game design to building a Lego set; one group creates each individual Lego brick, and another group uses those bricks to build the world in the game.Velicky prefers working in the second group, using the bricks to assemble the world — forming the free-roam experience for “Destiny,” for example — and, in many ways, he says that’s a lot like the time he spent toiling away at “Skyrim” mods as a teenager.“I really did just use all of the pieces that were already in the game,” he said.“I just assembled them in a new way to tell a new story.”.

Sat Jan 15 , 2022
My very first attempt at trying home VR haptic gloves was awkward.I stretched a pair of knitted gloves over my hands, adjusting little plastic tips, delicately screwing in holsters on the backs of large, plastic battery packs.I slotted Oculus Quest 2 controllers into slots over my gloves.Then, for a few […] 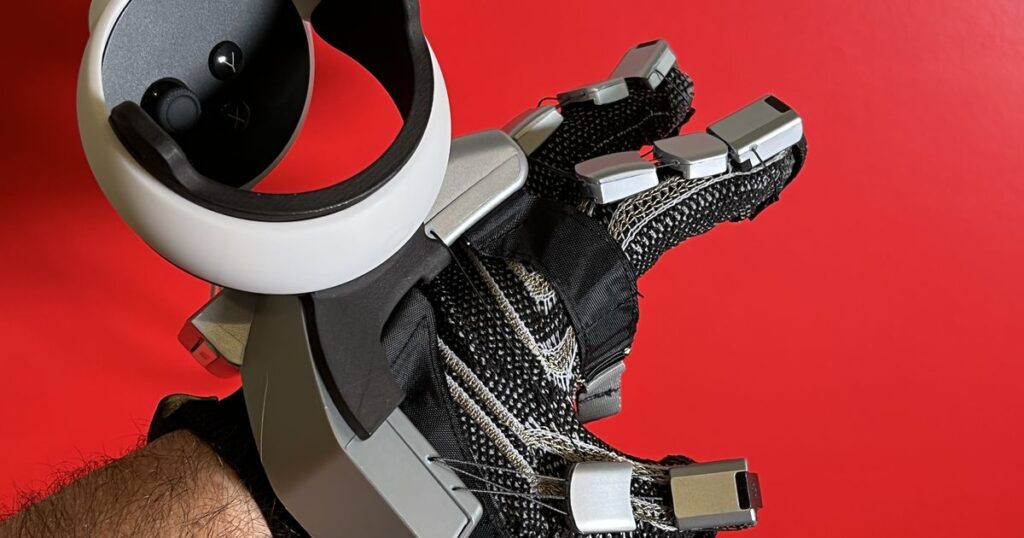