Evangelist Funmilayo Adebayo, has said those behind the trending Mummy G.O hellfire memes sent gunmen after her.She said they have been at it for about eight years now and just recently decided to make use of social media to disgrace her.The Evangelist who spoke to BBC Pidgin said they are angry because her messages are pulling their church members away from them and to her own church.This is as she addressed some of the Quote: s attributed to her in several Mummy G.O memes and videos which have gone viral on social media.

Asked to state why her message is always centred on heaven and hellfire, she said, “My message is to ensure that people make heaven.I want them to avoid things that will prevent them from making heaven, things that will send them to hellfire.My message also prepares people for the rapture because Jesus is coming back, whether people believe it or not.

Apart from the message I deliver, God is doing healings and miracles as we get testimonies from all over the world.” On if she feels bad about being called Mummy G.O, she said, “I don’t feel bad about being called Mummy G.O.Why should I feel bad? Many never knew I existed until they were told many bad things about me, but the wise among them will want to know the truth, from there they will know the real me.“90 per cent of them don’t know me.They are just flexing on social media to flow with the trend.They don’t even know the reason behind the trend.

There’s too much stress in this country, so people are easily carried away by anything that will make them laugh.They don’t know that those who started the trend did so to create a scandal.Some didn’t even know I truly exist, they thought it was all a joke.They are not my enemies, they don’t hate me nor do I hate them.” Addressing the statements captured in the viral videos and memes, Evangelist Funmilayo said, “All those videos are edited.

Even Lucifer, if he’s made a pastor today, will he ever say all those things attributed to me talk less of someone called a holiness preacher? So, most of those things attributed to me were never said by me.The people behind the trend have been at it for over eight years.Sometimes they make use of magazines.When that didn’t work, they sent gunmen after me.” She continued, “I’ve been receiving some strange calls saying ‘Evangelist Funmilayo you are affecting us.Many of our members hear your message and they pull out of our church.

If you don’t stop, we will kill you’.“I thought it was just a threat until we started seeing gunmen chasing us while driving, coming to our church to threaten us and so on.At times, when I’m inside a banking hall, they take my picture and forward it to me, saying if they wanted to have me killed, they would have done so.They say they will disgrace me if I don’t stop.

When they saw that I didn’t stop, they decided to make use of social media trends.” Read Also Women who wear makeup won’t make heaven “On women wearing makeup, I did say so and that wasn’t the first time I said so.I’ve travelled to many Islamic countries, you will never see their women wear anything that will open their bodies.Even their air hostesses, the way they dress shows they fear God.My stance against indecency would have been supported if it was said 50 years ago.Then, no woman could enter a church without wearing a scarf.

The God that frowned against women not wearing scarves, has he travelled or changed? A Muslim lady dare not enter a mosque without her head covered.But because I preached an old message, I’ve suddenly become a criminal.The truth remains the truth even if it’s just one person saying it.“Thousands of callers have told me that God told them to stop using makeup if they want to make heaven.The Bible doesn’t support makeup.

Jezebel was the first woman to wear makeup in the Bible.

If they say my preaching is too hard, are people expecting me to say the way they dress to a nightclub is allowed in the church?” she asked.This is as she cited Deuteronomy 22:5, saying, “No woman shall wear what pertains to a man and no man shall wear what pertains to a woman.” Footballers won’t make heaven “I’m not the only person who said that.We have people from Ghana who also said the same.Even white men said it too.Just go on Google, search for the god of soccer, it will be shown to you.Why didn’t I say the same about other sports? They just want to arouse every soccer lover against me.

The reason why I said it is the most difficult task is that obedience to God is the most painful thing.For example, there is a way we dress that we find appealing, some of which are seductive.Imagine Jesus saying you have to stop dressing in that manner before you can make heaven.

Is that not difficult? Also, you have a girlfriend who understands you, gives you business ideas and is okay in every way.Sadly, you are a married man.When your wife nags about money, the girlfriend consoles you.Will it not be painful if you hear a sermon that warns against extra-marital affairs? 80 per cent of what we like are disliked by God.That is why obeying God is difficult,” she said.Copyright PUNCH.All rights reserved.This material, and other digital content on this website, may not be reproduced, published, broadcast, rewritten or redistributed in whole or in part without prior express written permission from PUNCH.

The Great Resignation: Why more Americans are quitting their jobs than ever before - 60 Minutes - CBS News

Mon Jan 10 , 2022
We’ve all seen signs in front of shops, restaurants, and factories: “we’re hiring!” “Help wanted!” And now, the Omicron variant is taking a toll on the already depleted workforce.We’ve wondered how there can be so many open jobs when nearly every employer seems to be offering better pay, benefits and […] 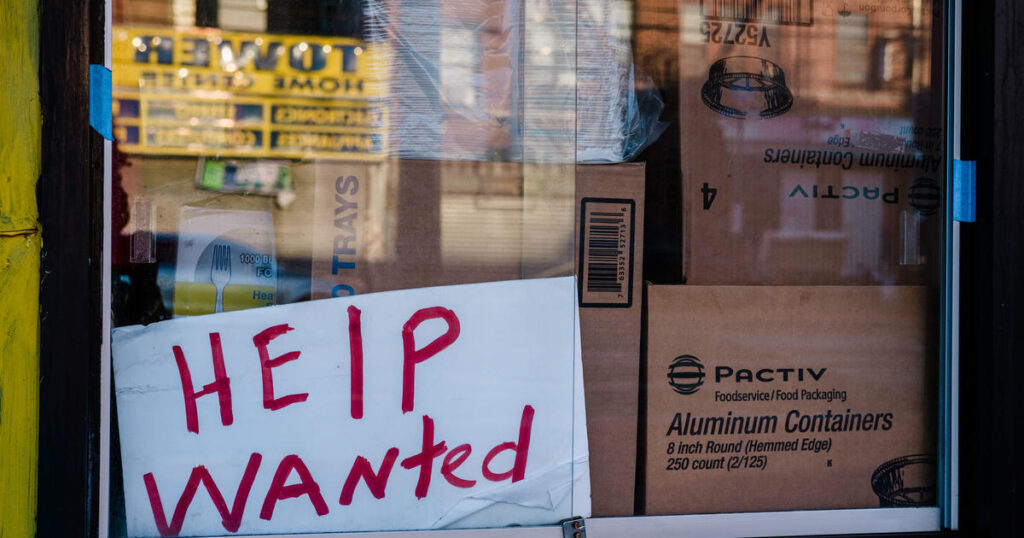