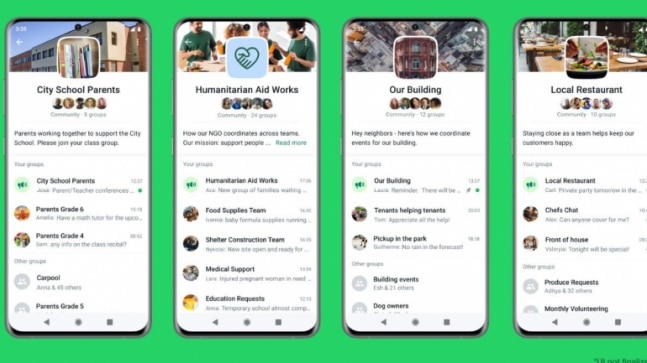 WhatsApp Communities feature announced Communities will allow users to “receive updates sent to the entire Community and easily organize smaller discussion groups on what matters to them,” the company noted in an official blog post.The feature will also bring new tools for admins, including announcement messages that are sent to everyone and control over which groups can be included.

With the feature, the messaging platform aims to make it easy for schools, local clubs, non-profit organizations to bring everyone under one roof and so there’s no communication gap.“We think Communities will make it easier for a school principal to bring all the parents of the school together to share must-read updates and set up groups about specific classes, extracurricular activities, or volunteer needs,” the messaging platform noted in the blog post.

— Reactions WhatsApp is getting emoji reactions to allow users to quickly share their opinion without flooding chats with new messages.Right now, one needs to send a message to respond to someone in the group.

— Admin Delete WhatsApp will now allow group admins to be able to remove errant or problematic messages from everyone’s chats.

— File Sharing The messaging platform is also increasing file sharing to support files up to 2 gigabytes so people can easily collaborate on a project.

— Larger Voice Calls WhatsApp previously extended group calls to 8 members from 4.Now, the company has introduced voice calling for up to 32 members at a time.WhatsApp has also redesigned the voice calls interface.

Fri Apr 15 , 2022
‘) > -1) { addClass($(‘.section-container’), ‘pill-tag’); } The Fashion Institute of Technology in New York on Wednesday honored Serena Williams with the Fashion Icon Breakthrough award at its annual awards gala. The event, which serves as a fundraiser for charity programs and student scholarships, aims to honor trailblazers in fashion […]