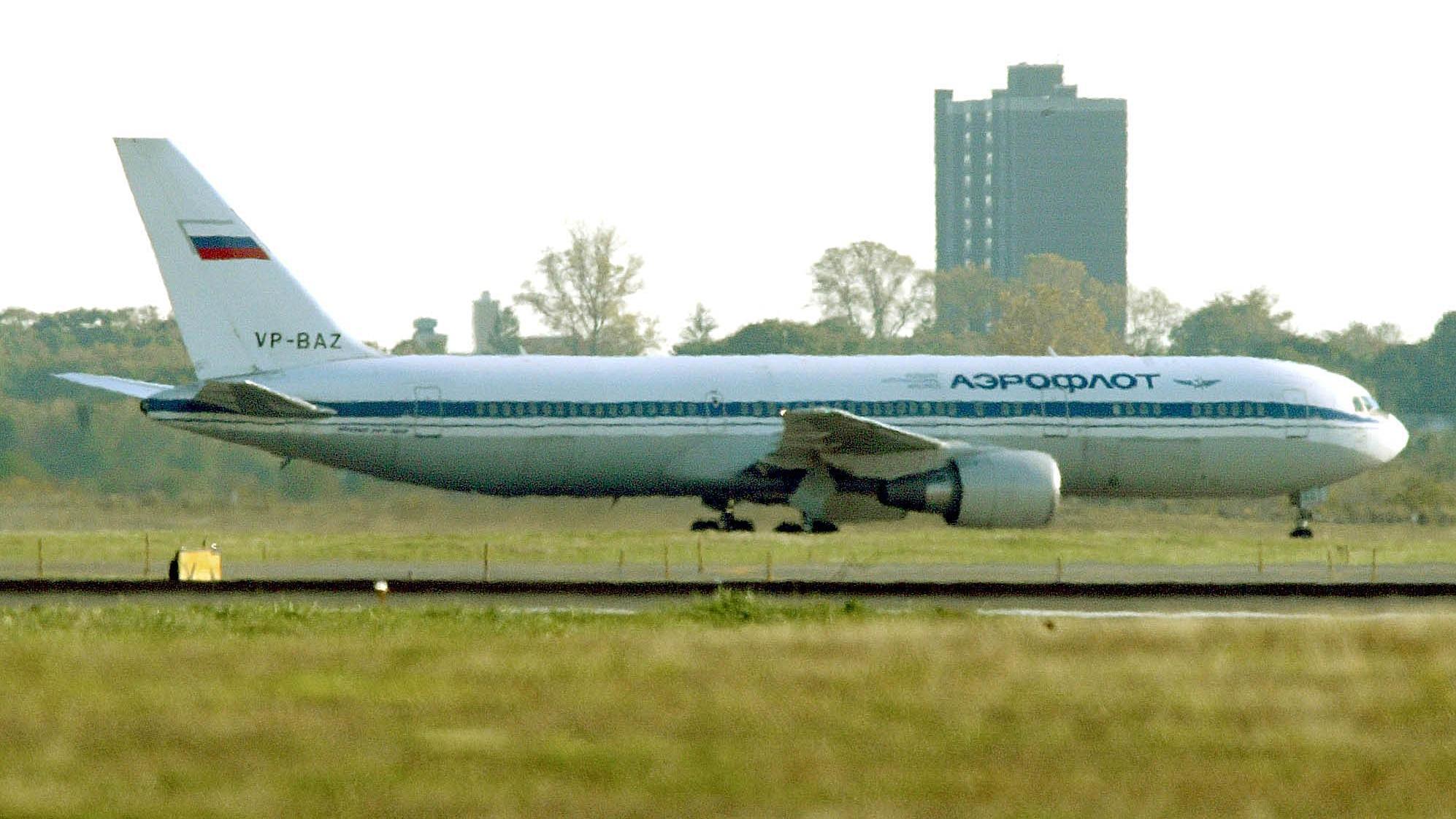 A Russian Aeroflot airplane is moved from a remote location at John F.Kennedy Airport in October, 2002, in New York.

DOUG KANTER/AFP via Getty Images Sweeping economic sanctions appear to be taking a heavy toll on Russia’s economy; the ruble has collapsed, companies like Coca-Cola, McDonald’s and Boeing have pulled out, and businesses there are struggling.

This includes Russia’s airlines, which are now almost entirely flying only domestically and could soon be forced to cut back on that.

But there’s a big problem in that most of the planes the Russian airlines fly are leased from Western companies, and the aircraft owners now fear they’ll never get their planes back.

Since the end of the Cold War, the aviation industry has become more global than ever, and it is completely interconnected.

“The west relies on China and Russia just as much as they rely on the west,” says George Dimitroff, head of valuations for the aviation analytics company Cirium.

“And I think these sanctions will probably demonstrate how dependent we are on each other.”

Exhibit A is the airplanes now used by Russian airlines.

“They’re operating mostly Western-made airplanes, Airbus or Boeing,” said Yi Gao, professor in the School of Aviation and Transportation Technology at Purdue University.”So the current sanctions on Russia will have a huge impact on their operators.”

According to Cirium’s data, of the 861 passengers and cargo aircraft currently in service in Russia, 332 of them were manufactured by Boeing, and 304 were made by Airbus.Dozens of the rest are from Bombardier and other western manufacturers, while only 136 are Russian-made Sukhoi planes (Sukhoi merged with MiG last year to create a joint airplane manufacturing venture called UAC).

Boeing, Airbus and other western companies that manufacture planes and aircraft components, such as engine makers GE and Pratt and Whitney, have suspended supplying spare parts and no longer provide maintenance and technical support services, and that could soon make it difficult for Russian airlines to keep their airplanes flying.

“There’s been talk again of what they call cannibalizing other aircraft to support the flying active ones,” said Eddy Pieniazek, head of advisory for the London-based aviation analytics firm Ishka.”They might start robbing parts of some aircraft, maybe the leased aircraft, to keep their own aircraft flying.”

As the airlines pull some planes out of service to provide working parts for others in their fleets, Russian airlines will likely have to significantly reduce the number of their flights.

And in a country as vast as Russia, reduced service between far-flung cities could have a big impact.

“Without proper maintenance and parts and equipment, I think a lot of [these] remote regions may lose (their air service) connection to the rest of the economy,” said Gao of Purdue.”I think that’s a threat to their domestic economy as well.”

Russian airlines are also losing access to funds in Western banks, the use of reservations systems and other software provided by Western venders and their customers can no longer use their Visa, Mastercard or other Western credit cards.

The largest Russian airline, Aeroflot, is majority state-owned, and some experts speculate that the economic crisis there may lead the Putin regime to take over the other airlines.

“A possible approach will be that the government of Russia will nationalize their airline industry,” said Gao.”Otherwise these airlines will not be able to survive through this,” especially if the sanctions and travel bans last a long time.

But there’s another problem, Russian airlines don’t own most of their planes.About 80-percent of them are leased, mostly from Western leasing companies, which now appear unable to get their airplanes back.

“It’s over 500 aircraft currently operated by Russian airlines, which are leased from Western lessors,” Dimitroff said.

“And so now that puts these lessors in a very tricky situation.”

Sanctions require the lessors to terminate their leases by March 28 and repossess their aircraft.In recent weeks, owners have been frantically trying to seize the few planes that were still flying to international destinations.But they’ve been unable to repossess all but a handful of those planes because they are being kept inside of Russia.

Dimitroff said it appears that the Putin government has “issued a mandate” that prohibits Russian airlines from returning planes to Western lessors “because these aircraft are strategically important to Russia,” he said.

Although Russian airlines are in default on their aircraft lease payments, they’re still able to fly their planes domestically, for now.

But they may have to ground much of their fleet soon because they lack the support needed to keep the planes flying..

Mon Mar 14 , 2022
Beijing has sacked several high-ranking officials for mishandling a rise in infections China has re-imposed some restrictions in response to its biggest spike in Covid-19 infections in two years. The country reported nearly 3,400 new cases on Sunday, most of them locally transmitted and around a half of them asymptomatic.On […]