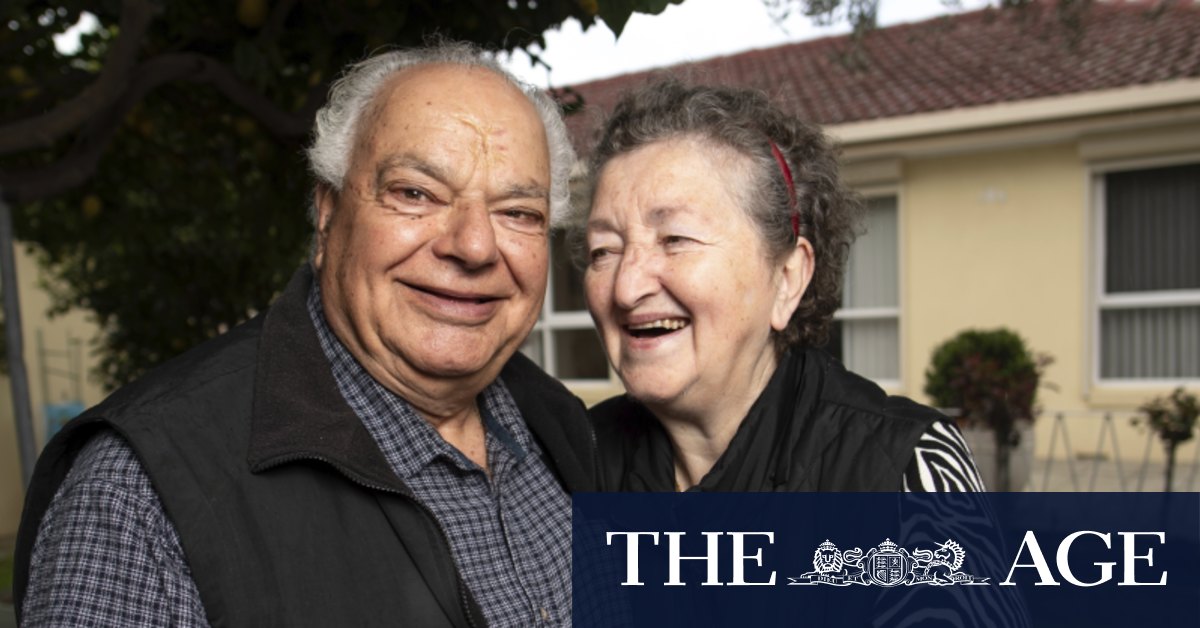 When 17-year-old Anna Papadonikolakis touched down at Melbourne Airport in 1971, her fiance, Manoli Vourvahakis, was there to meet her with a big bunch of flowers.The pair had never met.Manoli and Anna Vourvahakis in their Yarraville home of 40 years.Credit: Penny Stephens But for many months, Manoli in Melbourne and Anna in her village on the Greek island of Crete, had fallen in love through the exchange of letters and photos.In a new book about Yarraville’s Greek community by writer Olympia Koziaris, nee Zahopoulos, Mrs Vourvahakis, now 67, says she fell for Manoli’s kindness, and agreed to an engagement.“I knew that he would be respectful towards me.He was considerate and thoughtful,” she says.When she was 10 years old, a fortune teller predicted she would go “very far away”, marry a man whose name started with ‘M’ who would treat her well, and enjoy her life with him.

Manoli and Anna Vourvahakis after their 1971 wedding in Yarraville.And so it came to pass.This year, Anna and Manoli celebrated 50 years of marriage.The butcher shop in Anderson Street, Andrew’s of Yarraville, that Mr Vourvahakis founded in 1982 is still run by one of their sons, George.Their immaculately neat house is full of photos of their three sons and six grandchildren.Mrs Vourvahakis serves us koulourakia — biscuits with sesame seeds — and their citrus trees are flourishing.The book, called Yiasou Yarraville from Heartache to Heroes was a labour of love for Ms Koziaris, who grew up in Yarraville.Author Olympia Koziaris c1968 as a child, centre, in Yarraville’s Ballarat Street, with her parents and grandparents.

A circa 1968 photo of Ms Koziaris as a child in Ballarat Street with her parents and grandparents is on the book’s back cover.More than 100 people contributed to the project, which received a City of Maribyrnong grant.Those profiled in the book include Cally Kwas, nee Seitanidis, who challenged expectations of women to become a policewoman.Film director Ana Kokkinos says Yarraville was “a wonderful place” to grow up, despite its industrial surroundings.

But she notes migrant women’s struggles with language, isolation, sexism, discrimination and racism.

International wrestling champion Alex Iakovidis, in the1960s.There’s a chapter on international wrestling champion Alex Iakovidis, and one on Ms Koziaris’ uncle, John Zahopoulos, a TV repairman who ran the Apollo Video shop.Ms Koziaris said that during the pandemic, taking part in research was a welcome diversion for many interviewees who couldn’t see relatives.

“They were focusing on when they were young, remembering the shops and the little stories that went with their experiences of being in the area,” she said.Mr Vourvahakis said as a young man, the number of Greek shops in Yarraville “made me feel that I was back home”, except with a better quality of life: in Greece people were starving and there were few jobs.Mrs Vourvahakis said she loved the book, which brought back happy memories of her youth, of people and businesses she knew.She said Yarraville in the 1970s was “a beautiful village” with “a lot of Greeks”, and life seemed less complicated.To buy the book, email [email protected] or go to yiasouyarraville.wordpress.com.

Tue Sep 7 , 2021
It might surprise you to learn that many of the innovations deployed to counter the coronavirus were once obscure Pentagon-funded projects to defend soldiers from contagious diseases and biological weapons.The life-saving vaccine developed in record time owes a debt to these programs.To learn more, we met the man who has […]