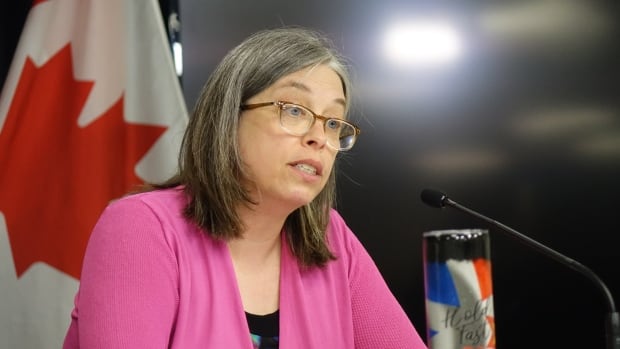 Newfoundland and Labrador will be moving forward with a vaccination passport, according to Premier Andrew Furey, as the province announced five new confirmed cases of COVID-19 on Tuesday.

All of the new confirmed cases are located in the Labrador-Grenfell region.Four are contacts of previous cases, while another is under investigation.

There are also seven new presumptive positive cases in the Labrador-Grenfell region.

There are now eight confirmed cases connected to an emerging cluster in the region.The cluster contains a large number of contacts, according to Dr.Janice Fitzgerald, chief medical officer of health.

As a result of the cluster, Fitzgerald announced six communities on Newfoundland’s Northern Peninsula will move into Alert Level 3, which requires residents in that region to wear face masks in indoor public spaces.Those communities include Roddickton-Bide Arm, Englee, Conche, Croque, St.Julien’s and Main Brook.

Fitzgerald said she ordered those measures due to potential community spread of COVID-19 and a low vaccination rate in the area.Several large gatherings in the region are under investigation.

The outbreak is the third cluster currently under investigation by public health.

The other two are in the Eastern Health and Western Health regions, which are still under investigation.

According to Fitzgerald, around 60 per cent people living on the tip of the Northern Peninsula have been vaccinated.

Fitzgerald added there have been 31 breakthough cases — confirmed positive cases in people who are fully vaccinated — since Dec.16, 2020.

Vaccine passport launching in coming weeks Furey said Newfoundland and Labrador’s approach to the vaccination passport will follow something similar to Quebec, which recently launched its passport program through a mobile app.The Quebec model was chosen due to its initial success, according to Furey, who said the province didn’t want to “recreate the wheel” when it came to a working piece of technology.

Furey said his government will introduce the passport within a month.He said the passport will use a QR code to show vaccination status, meaning it can be printed off and doesn’t solely rely on an internet connection to use.

As part of the announcement, Health Minister John Haggie said Newfoundlanders and Labradorians vaccinated outside the province will soon be able to receive vaccination documentation through an online portal.The online form will launch on Sept.

No current changes to masking in schools Monday’s report from the Health Department also called for a delayed opening of three schools in the Roddickton-Bide Arm area to allow time for contact tracing.

The schools are Cloud River Academy in Roddickton-Bide Arm, H.G.Fillier Academy in Englee and Mary Simms All Grade in Main Brook.

The province also reported 15 new cases of COVID-19 on Monday.One person is currently in hospital.

As other schools in the province prepare to reopen, Fitzgerald said public health is not ready to reintroduce mandatory masks in schools, but is prepared to change its position.

“Thankfully, the majority of students in our province will return to a low-risk environment,” Fitzgerald said Tuesday.

Fitzgerald said 70 per cent of the eligible population aged 12 to 19 are fully vaccinated, while 84 per cent of that age group have received at least one dose.

Thu Sep 9 , 2021
T he Los Angeles police department (LAPD) has directed its officers to collect the social media information of every civilian they interview, including individuals who are not arrested or accused of a crime, according to records shared with the Guardian. Beverly Hills: 99% of people arrested by ‘safe streets’ unit […]