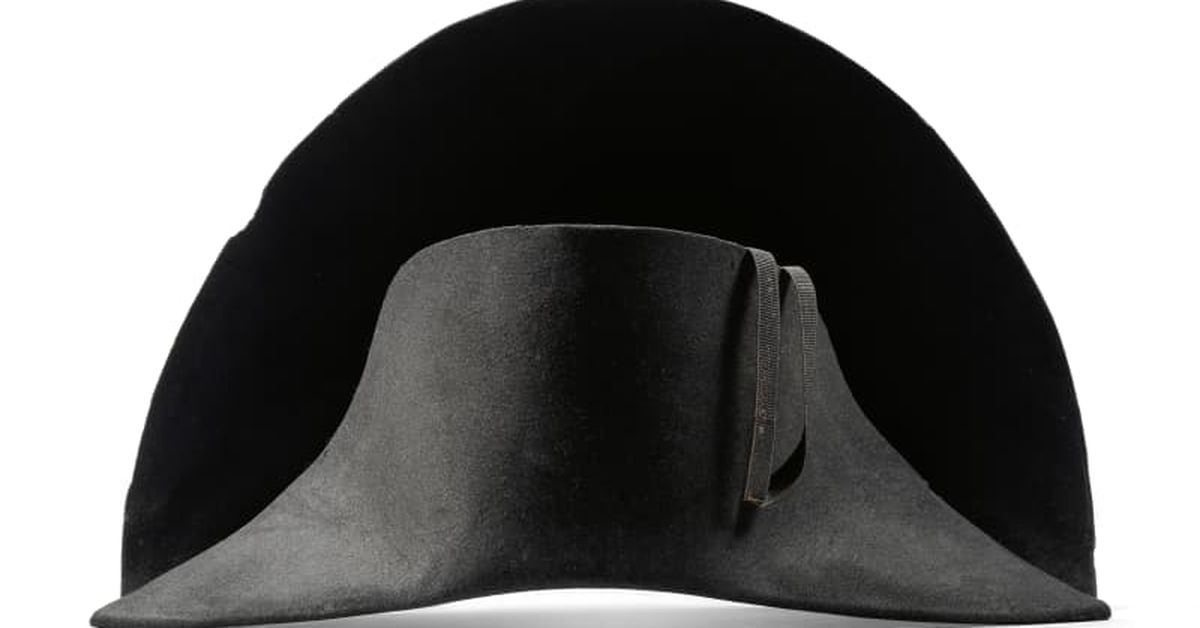 A newly rediscovered hat which DNA proves belonged to French Emperor Napoleon Bonaparte is set to go under the hammer in London next month.

A newly discovered hat which DNA proves belonged to French Emperor Napoleon Bonaparte is set to go under the hammer in London next month.

The Bicorne hat, often worn by Napoleon in paintings of him on the battlefield, was bought by its current owner, who had no idea who the original owner was, at a small German auction house.

But a DNA sample from the hat confirmed it belonged to Napoleon.

The newly discovered hat will be displayed at Bonhams Hong Kong, before moving to Paris, then London where it will be auctioned on October 27.

Al Capone is infamous for having been a ruthless mob boss, but one of his granddaughters says his softer side will shine through when the family auctions the Prohibition-era gangster’s personal items — including diamond-encrusted jewellery with his initials, family photographs and his “favourite” handgun.

The media dubbed him Public Enemy No.1 after the 1929 “Valentine’s Day Massacre” of seven members of a rival bootlegger gang in Chicago by his associates but his granddaughter Diane Capone describes him differently.

“He was very loving, very devoted to family, very generous, and the letter that we have is such a poignant, beautiful letter from a father to his son.These are things that the public doesn’t know about,” said Diane Capone, 77.

For sale is the Colt .45-caliber pistol Capone always carried with him and used several times to protect himself, Diane Capone said.

“That particular .45 was used in self-defence and it probably saved his life on a few occasions and so, he referred to it as his favourite,” she said.

Diane Capone said she didn’t know if the gun was used to commit any crimes and said her grandfather, who she called Papa, was never charged with killing anyone.

The pistol with elaborate etchings and a wooden grip will be the centerpiece of the auction and is valued at up to A$200,000, said Brian Witherell, founder of Witherell’s Auction House.

The sisters are also selling a diamond-encrusted pocket watch, an 18k gold and platinum belt buckle and a gold initialed “AC” money clip and home movies featuring Al Capone and his associates.

A rare falcon was sold for a record $98,098 (270,000 Saudi Riyals) recently at the International Falcon Breeders Auction in Saudi Arabia’s capital Riyadh.

The falcon is reported to be the most expensive bred at the Al-Aradi Farm.

The Saudi Gazette reported Mr Al-Ayafi wants to enter the prized bird in a “falcon beauty pageant”, which will reward the owner of the most beautiful falcon with a cash prize of $108,987 (300,000 Saudi Riyals).

He’s one of the most recognisable video game characters, and over the weekend Mario once again proved his worth.

A vintage Super Mario Bros.game, made in 1985 for Nintendo’s original console, has sold for $2.72 million, making it the most expensive video game.

An anonymous buyer purchased the game from collectibles site, Rally.

The Mario sale topped a record set just weeks ago when a sealed original copy of Zelda from 1987 sold for the staggering sum of $1,182,771.

So what makes the car so expensive? To start, it’s one of the most exciting and coveted road-going rally cars ever made.Given its extremely low mileage, the vehicle is perhaps the very best example of its kind left existing in the entire world.

A first edition of Harry Potter and the Philosopher’s Stone sold for $151,000 at a Tennants auction in the UK.It was one of 500 copies from the first edition, first impression, case-bound issue.

Of the 500 copies, 300 were sent to libraries and many were damaged.

The way to tell this edition apart from those of lesser value is the copyright page where the author is credited as Joanne Rowling.

On page 53 there is a repeated phrase of ‘1 wand’.And the rear cover misprints ‘Wizardry and Witchcraft’ (for ‘Witchcraft and Wizardry’).

A 1977 Jaguar XJS once owned by Kerry Packer is going under the hammer on Saturday.

The car has been dubbed “one of a kind”.

The car was the result of a competition between radio announcer and car collector John Laws and Channel 9 owner Kerry Packer.

For a cool $4.1 million, you could buy one of the most important historical artefacts of the Wild West.

The gun used to kill famed outlaw Billy the Kid is going up for auction in Los Angeles.

The .44 calibre Colt revolver was owned by Sheriff Pat Garrett.

The gun plays a pivotal role in the folklore of the old West, used to kill Billy the Kid in 1881.

Hickok was buried with his rifle in the South Dakota town of Deadwood in 1876.

But as the town grew, his body had to be exhumed along with the rest of the cemetery three years later.

It was then that the rifle was taken from the coffin.

A bottle of Penfolds Grange 1951 has gone under the hammer at a Langton’s auction for $142,131, which makes it the most expensive bottle of Australian wine ever sold, breaking the previous record of $103,000.

The bottle is one of the few rare examples in existence of the first vintage of Penfolds Grange ever made, and it went under the hammer at the Langton’s Penfolds Rewards of Patience auction which closed on Sunday night at 7pm.The buyer is a Sydney-based wine collector.

“This is extraordinary, never in my wildest dreams would I have thought a bottle of Australian wine would sell for this much.However, this is a unicorn of a wine, and one of the finest bottles we’ve ever seen come through at Langton’s,” said Langton’s Head of Auctions Tamara Grischy.

The buyer has essentially paid $28,400 per glass of the prized vintage.

Heritage Auctions in Dallas said the 1996 game sold on Sunday, breaking the previous record price for the sale of a single video game.

A spokesman did not immediately respond to an inquiry about who purchased the game.

Super Mario 64 was the best-selling game on the Nintendo 64 and the first to feature the Mario character in 3D, the auction house said in a statement.

A screenshot of the original gameplay is seen here.

A tiny sketch of a bear’s head by Leonardo da Vinci has sold for more than $16 million.

The pencil drawing was bought at Christie’s auction house in London, though there was only one bidder.

The purchaser has not been identified.

The drawing is very much a minor work from the greater painter and inventor.

But there is high demand for anything from the Renaissance artist, with scarce few items in private collections.

One of da Vinci’s paintings, Salvator Mundi, holds the record price for a piece of art, sold in 2017 for A$600 million.

Apple Warns Of New Supply Constraints Ahead Of iPhone 13 Launch

Wed Sep 8 , 2021
Apple’s massive new iPhone cameras are going to be a huge selling point (iPhone 13 Pro Max model …[+] shown Vs iPhone 12 Pro Max) Unbox Therapy And, for a company of Apple’s unparalleled supply chain expertise, this is something of a shock.While the Global Chip Shortage has impacted most […]