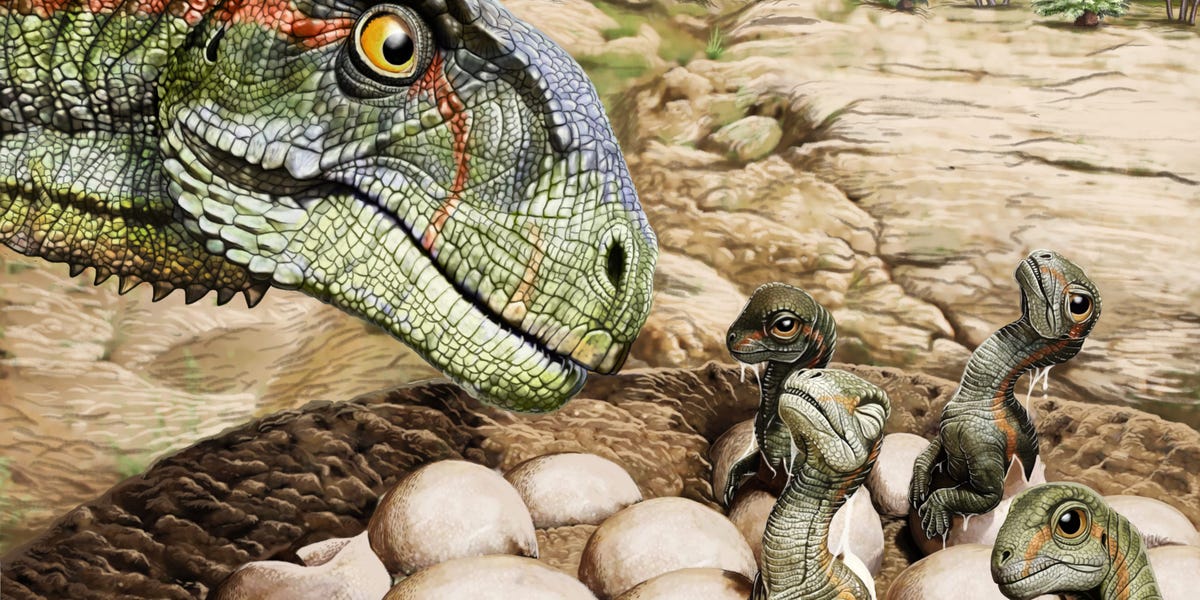 Paleontologists found 100 eggs and 80 skeletons from a dinosaur called Mussaurus at a nesting ground in Patagonia.The fossils were grouped into clusters of adults and juveniles, suggesting Mussaurus lived in herds.The nesting ground is 193 million years old, making it the earliest evidence of dinosaur herds.Get a daily selection of our top stories based on your reading preferences.Loading Something is loading.

Email address By clicking ‘Sign up’, you agree to receive marketing emails from Insider as well as other partner offers and accept our Terms of Service and Privacy Policy .A 193-million-year-old nesting ground containing more than 100 dinosaurs eggs is upending paleontologists’ understanding of an early dinosaur species.

Research published Thursday describes a collection of eggs and juvenile and adult skeletons from a dinosaur called Mussaurus patagonicus, which were found in Patagonia, Argentina.The dino is an ancestor of long-necked herbivores called sauropods, such as Brachiosaurus.

Most of the chicken-sized eggs were discovered in clusters of eight to 30, suggesting they resided in nests as part of a common breeding ground.

“I went to this site aiming to find at least one nice dinosaur skeleton.We ended up with 80 skeletons and more than 100 eggs (some with embryos preserved inside!)” Diego Pol, a researcher with the Egidio Feruglio paleontology museum in Patagonia and the lead author of the new study, told Insider via email.

He called the site “one of a kind.”

Before this discovery, researchers thought herding behavior was restricted to dinosaurs that came much later, in the very late Jurassic and early Cretaceous periods.That’s because the earliest fossil evidence of sauropod herds only dates back 150 million years.This nesting ground, however, pushes that timeline back more than 40 million years.It’s the earliest known evidence of social groups among dinosaurs, the study authors said.

The dinosaurs they found were no more than 6 inches long.Unaware that they’d uncovered newborns, the researchers named the creature “mouse lizard” because of the skeletons’ tiny size.

Pol decided to reexplore the area starting in 2002, and by 2013, he’d helped find the first adult Mussaurus fossils there.Those bones revealed that full-grown versions of these “mouse lizards” were closer in size to modern-day hippos.They grew to weigh about 1.5 tons, reaching lengths of 26 feet from nose to tail tip.But infants could fit in the palm of a human hand.

A screen shot from a video showing how scientists like Diego Pol used high-energy X-rays to peek inside a Mussaurus egg without destroying it.Vincent Fernandez/Diego Pol/European Synchrotron Since then, Pol’s team has also uncovered and studied the contents of the nesting ground, which measures just under half a square mile.In 2017, he took 30 of the eggs to a lab in France, and his group then used X-ray technology to peek inside and confirm the species of the embryos without breaking the shells.

By analyzing the sizes and types of bones in the nesting ground, the researchers determined that the animals were buried near counterparts of a similar age.

Some clusters had juveniles less than a year old, others consisted of individuals that were slightly older but not yet fully grown, and finally, there were smatterings of adults that had died solo or in pairs.

That type of age segregation, the researchers said, is a key sign of herds: Juveniles hung out with others their age while adults looked for food and protected the community.

“They were resting together and likely died during a drought,” Pol said.”This is compatible with a herd that stays together during many years and within which the animals get close to each other to rest, or to forage, or do other daily activities.”

Another strong indication of herd behavior is a nesting ground itself: If Mussaurus lived as a community, it would make sense that they’d lay eggs in a common area.

Living in herds may have helped Mussaurus survive Nest with Mussaurus eggs dated to more than 190 million years ago, found in Patagonia.Diego Pol To figure out the fossils’ ages, researchers examined minerals in volcanic ash that was scattered around the eggs and skeletons, and determined that the fossils were about 193 million years old.

The key to that survival, the study suggests, may have been their herding behavior.

“These were social animals and we think this may be an important factor to explain their success,” Pol said.

An artist’s depiction of the nesting ground of a Mussaurus herd of in what is now Argentina.Jorge Gonzalez Communal living likely helped Mussaurus find enough food, perhaps by making it easier for them to forage over larger areas.

Mussaurus of the same size would likely “group together to coordinate their activities,” Pol said, given that larger adults and tinier juveniles moved at different speeds.

He added that given the size difference between newborns and adults, it probably took these dinosaurs many years to reach full size.So young Mussaurus might have been vulnerable to predation.

By staying in herds, adults could better protect their young.

Mon Oct 25 , 2021
The best phone in the world right now is the Samsung Galaxy S21 Ultra , but if that isn’t for you we’ve got 14 other top picks that may suit you, including the best iPhones and a variety of other Android phones . Our phone experts have spent years reviewing […]