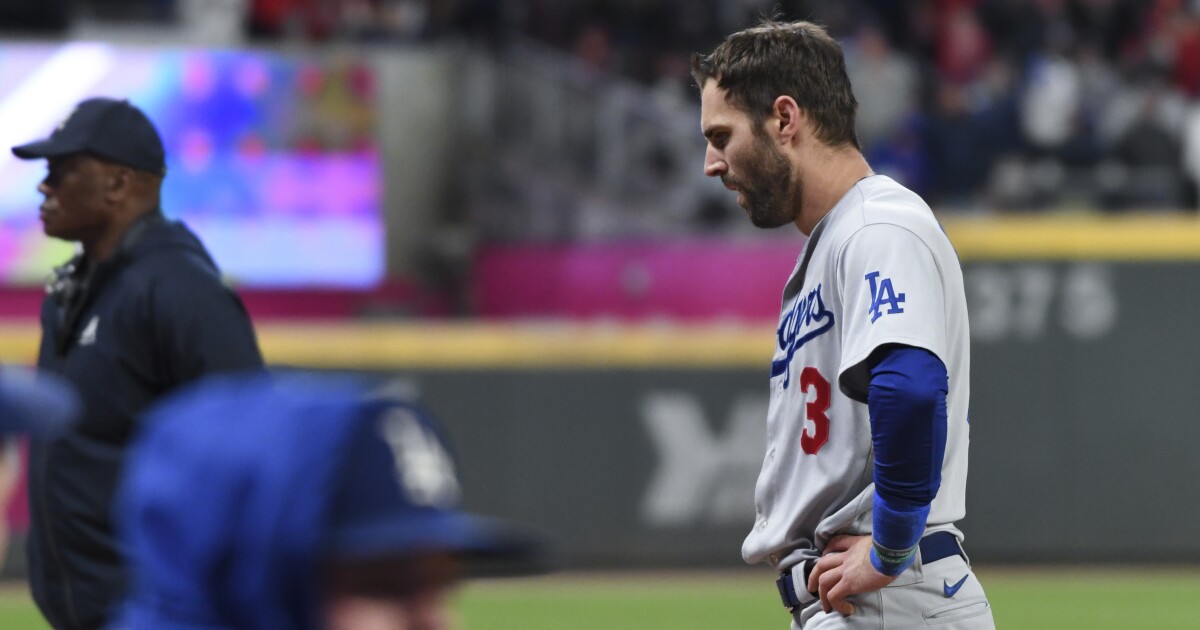 ATLANTA — Chris Taylor sat on the infield dirt , removing his helmet in disgust.

His mistake on the bases had cost the Dodgers a potential run.The lapse in judgment was about to cost them the game.

The Dodgers collected 10 hits on Saturday night at Truist Park, the last of them a sharp single to right field by Cody Bellinger in the top of the ninth inning.

All of that offense, however, translated into only two runs, none after the fourth inning.

Advertisement The wasted chances opened the door for the Atlanta Braves to steal Game 1 of the National League Championship Series , which they did when Austin Riley ’s single drove in Ozzie Albies for a walk-off 3-2 victory .

Chris Taylor made a late baserunning miscue, and the Dodgers’ choice to pitch to Austin Riley backfired when he hit a walk-off single in Atlanta’s 3-2 win.

The Braves didn’t win this game.The Dodgers lost it.

“We threw out some hits,” manager Dave Roberts said.“We just couldn’t get the hit when we needed.”

And in one of the rare instances in which they did, when Bellinger singled in the ninth, Taylor made a baserunning gaffe for the ages.

Taylor, who reached base by drawing a two-out walk from Braves closer Will Smith, initially thought he could advance to third base on the play.

“Just a bad read on my part,” Taylor said.

But as he rounded second base, he peeked over his right shoulder and saw that right fielder Joc Pederson was winding up to throw.

“I should have kept going,” Taylor said.

“We got him,” Albies recalled thinking.

Dodgers manager Dave Roberts and second baseman Trea Turner talk about the team’s 3-2 loss to the Atlanta Braves in Game 1 of the NLCS on Saturday.

Pederson threw the ball behind Taylor to shortstop Dansby Swanson, who was covering second base.Taylor was caught in a rundown.

“That’s a huge, huge out in the game,” Braves manager Brian Snitker said.

In retrospect, Taylor said he should have stopped at second base.Doing so would have brought up Mookie Betts with two outs and men on first and second.

The chances started early and came often, even with No.

Corey Seager doubled with two outs in the first inning, only for Justin Turner to follow with a strikeout.

Photos from Game 1 of the National League Championship Series between the Dodgers and Atlanta Braves at Truist Park in Atlanta on Saturday night, where the Braves won in the ninth with a walk-off single by Austin Riley.

The Dodgers’ only hit with a runner in scoring position came in the second inning when AJ Pollock doubled and was driven in on a single by Taylor, leveling the game at 1-1.

Trea Turner stroked a two-out single to center field in the fifth inning and stole second base, only for Seager to strike out looking.

Justin Turner singled to center field in the sixth and reached second base on a wild pitch by Fried to Albert Pujols.Justin Turner moved to third on a groundout by Pujols, but Pollock lined out to Albies for the third out.

Fried was removed after that inning.

“Tonight, considering the stuff Fried had, to get him out after six, I thought we took good at-bats,” Roberts said.

The troubles continued after Fried departed.

Using pitchers as openers has strategic value but is it good for the game? Dodgers starter Max Scherzer doesn’t think it’s something fans like to see.

Taylor led off the seventh inning with a double against left-hander Tyler Matzek.Pinch hitter Austin Barnes put down a perfectly placed sacrifice bunt to move Taylor to third base.

With Taylor on third with one out and Betts at the plate, the go-ahead run felt like an inevitability.

He swung and missed at the first pitch, a 98-mph fastball below the strike zone.

He fouled off a 99-mph pitch that was outside.

Three pitches later, he swung and missed on a slider that was low and inside.

“I think I might have been a little too aggressive, but I’m OK with that because that’s what I told myself I wanted to do,” Trea Turner said.

“He made some good pitches, I swung at some balls.Obviously, I’d like to have that at-bat back.”

In the regular season, the Dodgers could console themselves after a game like this by reminding themselves the numbers would eventually even out, that timely hits were bound to come.

Now, they are confronted with the harsh truth of the postseason: Drive in runs or go home.

The Dodgers collect 10 hits and 14 strikeouts yet still manage to stagger and stumble to a disappointing loss to the Atlanta Braves in Game 1 of the NLCS..

Mon Oct 18 , 2021
A now-defunct YouTube channel called Games Anime and More posted a 27-second clip of Elden Ring gameplay that made it around the internet before being taken down.(You can probably still find it on Twitter or the Elden Ring subreddit .) The footage doesn’t show much, just an armored character on […]