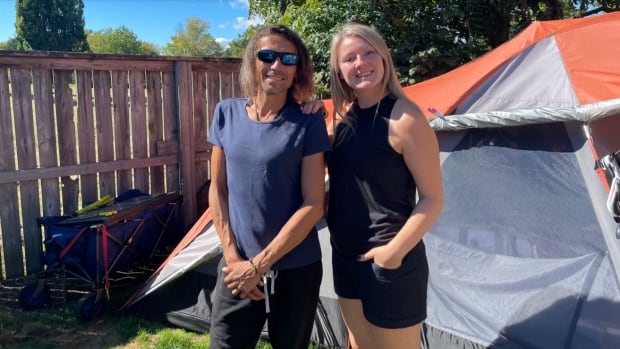 Ask David McDonald and Kim Cormier who’s getting the most out of their new friendship, and they’ll both point to themselves.

“I feel very blessed to have met David,” Cormier said from her home in the Skeleton Park neighbourhood of Kingston, Ont.

“I’m the blessed one,” corrected McDonald, sitting beside her.

It was a chance encounter this past July that brought them together.

McDonald, 46, who’s been intermittently homeless since 2016, was passing Cormier’s house on his e-scooter earlier this summer when he blew a tire.He asked Cormier, who was working outside on her laptop, if she would watch his belongings for him while he went to Canadian Tire for a new inner tube.A lot of his things had been stolen recently, and he didn’t want to lose more.

He’s part of the family now.

– Kim Cormier When he returned, Cormier invited McDonald to stay for dinner with her and her partner, Andrew Embury.

“We hit it off,” McDonald said.”Every time we have a conversation, there’s laughter.”

Until 2010, he owned a Pioneer gas station in Kingston, pulling in close to six figures a year.But when gas rose to a dollar a litre, fewer customers showed up and he lost his business — then his house in Kingston’s Cataraqui Woods neighbourhood and then his Dodge Durango.

Around the same time, his 10-year relationship with another man ended.

“I literally lost my whole life after the gas station — the life that I knew then,” he said.

Tiny homes could be the answer to homelessness in Kingston Kingston’s homeless population declining, survey shows McDonald relocated to Toronto with his teenage daughter, and when she moved out he took a Greyhound bus to Vancouver, where he experienced homelessness for the first time.

Nine months later, afraid he’d die in B.C., McDonald packed up his few possessions and walked and cycled more than 3,000 kilometres back to Ontario, eventually ending up living in a Toronto park.

‘I couldn’t imagine being homeless.I cried,” he said.

“And so it was hard for me to accept help — charity, I felt.’

After stints staying with various relatives near Kingston, he returned to the city at the end of 2018.

McDonald, who once owned a gas station in Kingston, lost everything in 2010.’I couldn’t imagine being homeless.

I cried.And so it was hard for me to accept help — charity, I felt.’ (Kim Cormier) Robbed and threatened For the next year and a half, McDonald shared a one-bedroom apartment with a stranger, but he says other tenants made his life miserable, stealing from him and threatening violence because of his sexuality.

Shortly after his first encounter with Cormier, McDonald vacated the apartment and began living in a tent.When it rained, he sheltered in an abandoned transport trailer he called his “cave,” supplementing his monthly $1,124 Ontario Disability Support Program payments by roaming the city collecting what he calls “boozy cans.” (McDonald suffers from social anxiety and is unable to work in a traditional setting.)

“I don’t use the services provided for [the] homeless because I feel that, although I’m homeless, other people are worse off than me,” McDonald said.

She’s done more than I can ever say thank you for.

He finds most of what he needs in the trash, making use of the things the rest of us throw away — an air conditioner, a coffee machine, even a toothbrush.

Some days, that includes food.

“You have to swallow your pride when you’re homeless,” he said.

“There’s a misconception about homeless people not wanting to work and being lazy, and he’s none of the above,” Cormier said.

“He doesn’t drink or do drugs.He’s out all day long just finding things, accumulating, and he’s generous to the rest of the homeless people.”

‘A friend to rely on’ McDonald will tell you Cormier is the generous one, as she gradually replaced his stolen belongings.

Once, when she noticed his too-small shoes were leaving his feet blistered, she literally gave him the Birkenstocks off her own feet.Cormier and Embury have also given McDonald new clothes, as well as a backpack equipped with a solar panel so he can charge his phone.

Earlier this month, Cormier and Embury invited McDonald to move into their backyard.His new three-season tent, donated by a sister he hadn’t seen in years, has a queen-sized mattress, a sofa, a fridge and carpeting.He cooks over Cormier’s outdoor fireplace and knocks on the door to use the washroom or do his laundry.

“She’s done more than I can ever say thank you for,” McDonald said.

According to Cormier, McDonald gives back in his own way.

“He has very good stories, and he’s just friendly and respectful,” she said.”It’s kind of nice to have someone come in and out, and someone to talk to, and a friend to rely on.”

McDonald’s new micro home will resemble this one by manufacturer EnerDynamic Hybrid Technologies, based in Niagara Falls, Ont.

(EnerDynamic Hybrid Technologies) Home small home Cormier, 35, is so pleased with the arrangement that she and Embury have come up with an idea to let McDonald stay there all winter — an insulated “micro home” that he’ll one day be able to call his own.

A mortgage agent, Cormier says she got the idea from a local organization she’s involved with called Our Livable Solutions, which is in the early stages of planning a community of tiny houses to give Kingston’s estimated 400 homeless people a permanent place to live.

She launched an online fundraising campaign, which by Friday was about halfway to its goal of raising the $18,000 needed for McDonald’s new 80-square-foot living space.With the deposit paid, the Niagara Falls, Ont., manufacturer is expected to deliver the home to Cormier’s backyard sometime next month.

‘Tiny house’ trend moving into Ottawa area The donations have included a $2,500 gift from a complete stranger, an employee with the local public school board.

“It brought tears to my eyes and goose bumps.

I couldn’t believe it,” McDonald said.

He plans to repay Cormier whatever balance is left, and when that happens the portable home will become his to move wherever he wants.But Cormier says she’s in no rush for that to happen.

Sun Sep 19 , 2021
Daniel Craig bid farewell to his role as James Bond , and the cast and crew he got to know along the way, in an emotional video shared to Twitter on Friday.In the clip, which was reportedly recorded on the set of No Time To Die in 2019, the 53-year-old […]