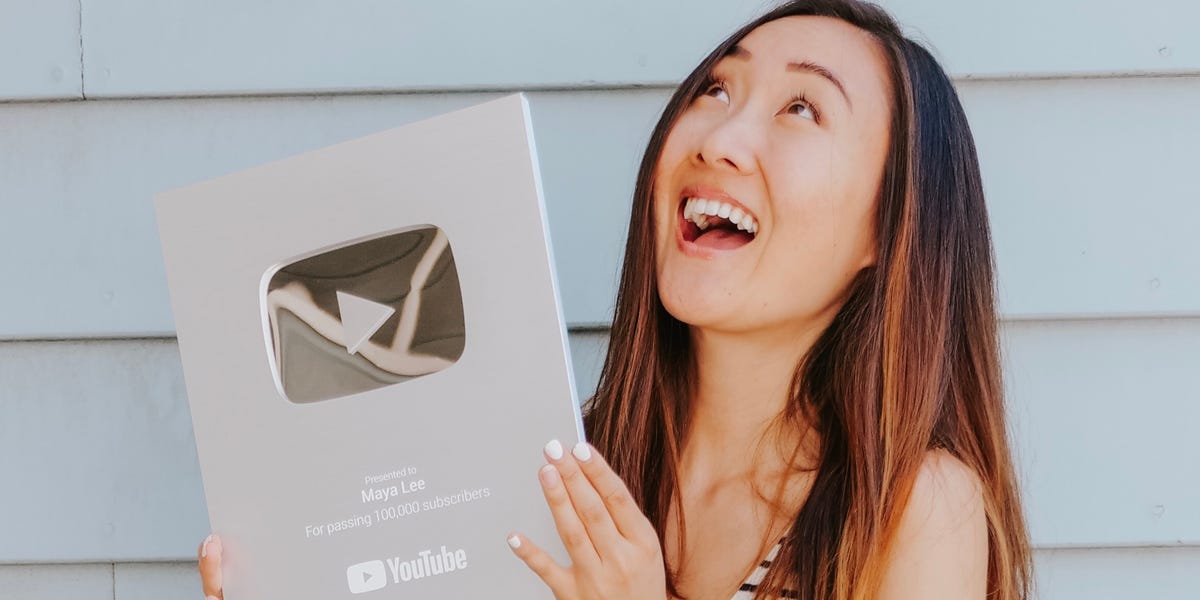 Tiffany Ma is a full-time social-media influencer with 1.8 million subscribers on YouTube.

Ma earns money each month from her YouTube channel through the Google-placed ads that play in her videos, affiliate marketing, brand sponsorships (her top income source), and her Shopify store, where she sells used clothing.

Ma broke down how much her channel has earned from Google-placed ads in 2021 through the Partner Program.Insider verified her earnings with documentation she provided: January: $4,500 March: $10,500 April: $5,700

“To really optimize your audience, I think YouTubers should definitely put three to four ads within a video,” Ma said.

Charlie Chang realized YouTube could become a business after his channel was accepted into the Partner Program last year.

He shifted away from real-estate content toward personal finance related videos in April 2020, after finding success making videos about trending topics, like stimulus checks .

“Luckily, I had the right type of content to actually be ranked in searches and that really grew my channel,” Chang told Insider.

His two main sources of income are usually money earned from advertisers: both through YouTube’s Partner Program (where Google places ads in videos and pays creators a cut) and brand sponsorships Chang negotiates himself.

Chang broke down how much his YouTube channel has earned so far from Google-placed ads in 2021 through the Partner Program.Insider verified his earnings with documentation provided by Chang: January: $34,900 February: $33,200 March: $23,300

Chang edits most of the videos on his main channel, and he also hired a video editor to help him produce content for two new YouTube channels he is building.

Marissa Lyda is a full-time YouTube creator who films videos on budgeting and her life as a mom.She started her YouTube channel in 2016.

Lyda’s YouTube channel has gained about 1,000 new subscribers since she spoke with Insider in March, when she had about 52,000 subscribers (her channel now has 53,000) .

As a YouTube creator, she earns most of her revenue from brand sponsorships, ads placed in her videos through YouTube’s Partner Program, affiliate marketing, and by selling a budget template on Etsy.

In 2020, her YouTube channel earned $15,700 from ads through the Partner Program.(Insider verified her earnings with documentation provided by Lyda.)

Instead of relying on what she’ll earn each month from her online business, Lyda built out a reserve within her business checking account so that she can pay herself a steady salary each month and stay within her budget.

Overall, Pruitt’s YouTube channel earned $1,920 in 2020 with 744,000 views.Insider verified her earnings with screenshots of her analytics dashboard.

In March, she broke down how much money her channel had earned over the past three months: December: $505 January: $108 February: $82

She added that her earnings fluctuated seasonally, with typically higher ad rates toward the end of the year.

His channel’s slogan is: “You don’t need to be a hero to save the planet.”

Insider verified his earnings with screenshots of his analytics dashboard.

For 2021, Hildebrand said he will be donating all of the money his channel makes this year from YouTube AdSense to One Percent for the Planet.

Lauren is a part-time influencer who earns revenue as a creator from sponsorships and ads placed in her videos through YouTube’s Partner Program.

She is part of a category known as “nano influencers,” which are generally defined as creators who have fewer than 5,000 subscribers on YouTube and between 2,500 and 10,000 followers on Instagram.

She works in public relations full time and treats her social-media pages as a side hustle.

In December 2020, her channel earned $195.Insider verified her earnings with screenshots of her analytics dashboard.

She uploads at least two videos a week on YouTube and tries to film timely, searchable videos.For instance, she recently reviewed Apple Fitness Plus classes after the service debuted in December, and that video has over 4,000 views .

Erin Winters is a full-time YouTube creator who films videos on business, video production, social-media marketing, and her daily life in Michigan.

Winters started her channel in 2018 after her year-long contract with National Geographic ended.

Winters’ YouTube channel had about 219,000 subscribers when she spoke with Insider in December.

She turned her YouTube channel into a career by monetizing her videos with ads and brand deals.

Winters actually ended up turning off her channel monetization for the first four months, thinking she might turn away new followers by having ads on a channel with only 1,000 subscribers.

(Looking back, she doesn’t recommend waiting, she added.)

When she turned monetization back on after those months, her first YouTube paycheck was around $200, she said.

In October, Winter’s YouTube channel earned $5,439.Insider verified her earnings with screenshots of her analytics dashboard.

She believes her initial success on YouTube comes down to timing, her background in journalism, and some luck.

She said posting searchable content is one way to grow an audience on YouTube — like her videos on money saving tips, how to grow a YouTube channel, and productivity apps — which have all increased her overall traffic and helped her reach a new audience.

Erica Boucher lives in California and makes soy wax candles for a living.

Boucher left her job in 2020 and decided to sell candles full time after being accepted into YouTube’s Partner Program.

“The pandemic happened and I wasn’t working at my full-time job, but I didn’t know how long that would last,” she said.”I had a little bit more time to work on my business and it absolutely exploded.

Honestly, my YouTube channel and Instagram have brought so much traffic and helped me grow my shop.”

Now, Boucher said her most lucrative revenue stream is her YouTube channel.She films videos like how she prices her candles, how much materials cost, and how she funded her business.

In October, she earned $3,961 from YouTube’s AdSense program, she told Insider in November.

She saves 25% of every check from YouTube for taxes, and year-to-date, she’s earned $14,320 from YouTube ads, according to screenshots of her creator dashboard viewed by Insider.

Taylor Hawkes is a part-time YouTube creator and a full-time real estate associate.

Hawkes started regularly uploading videos to her YouTube channel, Taylor Made Style , in October of 2019 and posts ” Come Thrift with Me ” videos about thrift shopping and how she styles her finds.Within a few months, she started to monetize her growing channel through AdSense revenue and brand partnerships.

In September, she earned about $1,600 in pre-tax income through Google-placed ads, according to screenshots of her Creator Dashboard viewed by Insider.

Hawkes also earns money through brand sponsorships on her videos and usually charges brands $500 for a 60-second mention.

Alexa Hollander is a full-time YouTube creator who creates content about shopping at thrift stores, styling second-hand clothing, and discussing sustainability in fashion.

Hollander’s YouTube channel had about 231,000 subscribers when she spoke with Insider in August 2020.

Hollander started her YouTube channel in 2014 and quit her retail job in 2019, after realizing she was making more money on YouTube.She earns the majority of her income now from Google-placed ads on her videos.

Between June and August 2020, she was making between $5,000 and $6,000 each month, according to screenshots of her AdSense Dashboard viewed by Insider.

Outside of ad revenue, she makes money by partnering with 2-3 brands each month on sponsorships, earning anywhere from $1,000 to $4,000 per sponsorship.As a sustainable creator, though, Hollander said it’s difficult to find brands to partner with who align with her and her channel’s values.

Maya Lee is a YouTube creator who started her YouTube channel in 2017 and now posts productivity videos and vlogs about her daily life.

She earns more money each month from her YouTube business than from her day job as a teacher, she said.

Monthly, her channel earns about $1,500 on average from Google ads, she told Insider in July.

In May, she made $1,471 from YouTube directly, and in June she earned $1,676, according to screenshots of her Creator Dashboard viewed by Insider in July.

“My monthly YouTube revenue is much higher than my teacher salary, especially when I do a lot of sponsorships,” she said.”For Google AdSense, every month it depends on how many videos I’m posting and how well those videos are doing.My monthly revenue from Google AdSense is not consistent, but from sponsorships I can talk to a brand on how much I’m willing to accept and gauge for that month how much I’ll make.”

Read the full post: Was this article valuable for you? Yes .

Wed Sep 22 , 2021
George Holliday, the Los Angeles plumber who shot grainy video of four white police officers beating Black motorist Rodney King in 1991, has died of complications of COVID-19 , a friend said Monday. Holliday, 61, died Sunday at a Los Angeles hospital, where he had been for more than a […]