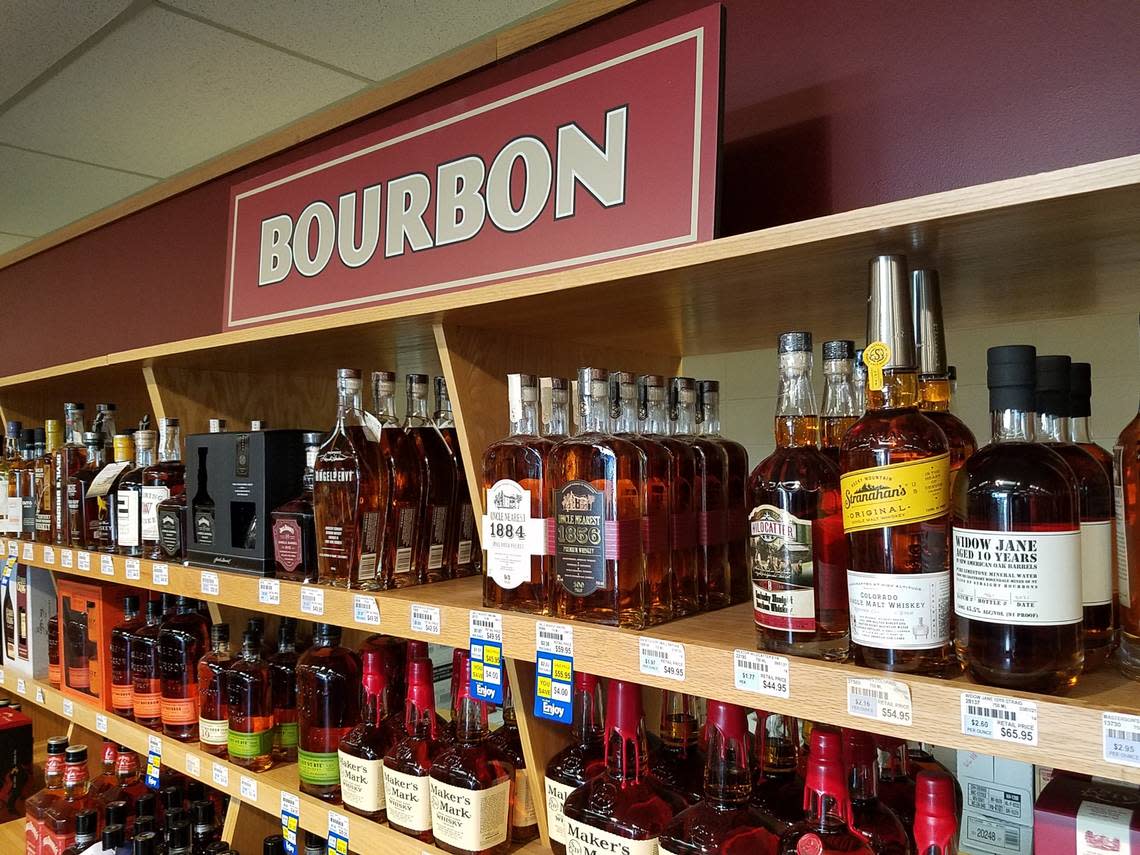 When a man was relaxing in a chair outside a Ketchum liquor store before it opened one recent morning, the manager knew something was up.The guy even brought a blanket.

Hearing that anecdote 155 miles away in Boise, Tony Faraca knew exactly what was up.

Already strong, the lust for whiskey has rocketed to a new level the past few months.Statewide, customers have been lining up and purchasing sought-after products at opening bell.Their target? Bourbon.

Organized groups buy up rare bottles limited to one per customer, sometimes hopping from store to store, says Faraca, the Idaho State Liquor Division’s CFO.Some shoppers try to convince employees to dig through unopened boxes in storage.Armed with inventory details from the Liquor Division’s consumer website, Mix Blend Enjoy , a few become confrontational if something is not on display.

“Some of them — not all of them — have gotten very aggressive with these products,” Faraca said.

“ ‘I know this product is in the store.

You need to go grab it and give it to me.

New policy On Oct.22, the Liquor Division changed the game.

Rather than shipping a prize such as Blanton’s Single Barrel to specific, so-called “whiskey stores,” the state is dispersing it widely — to 67 locations — and metering it out on shelves.Inventories of rare products no longer are shared online at MixBlendEnjoy.com.Staffers won’t sell anything not on display.And, as always, rare liquors are limited to one per customer.

“Our hope,” Faraca said, “is that more people will get to partake in the rare product.”

The bourbon craze is not new.It’s been a trend across America for years.

But, Faraca says, behavior in Idaho that triggered the new policy has gone “from bad to worse” in recent months.

“I’ve talked with colleagues in other states, and they are experiencing the same exact thing.This is not unique to Idaho, this is a nationwide issue,” Faraca said.

Story continues Part of the newfound hysteria was created by the Liquor Division, says Chris Schmierer, 45, of Nampa, who runs the Facebook group Boise Whiskey Enthusiasts.He says a newsletter from Mix Blend Enjoy informed customers that in celebration of Bourbon Heritage Month, a trove of rare whiskeys would be hitting shelves throughout September.

“ Every bourbon chaser on every delivery day was lining up ,” Schmierer said.“It got really bad.

It’s essentially like they created their own pandemic of bourbon.Instead of toilet paper, it was a run on bourbon.”

In 2020, customers lined the sidewalk in front of the state liquor store at 17th and State streets after Gov.Brad Little ordered Idahoans to stay at home except for essential business.Either way, Faraca maintains, change was needed.

“We know that there is a lot of hoarding going on,” Faraca said.

“We know that there are illegal secondary sales going on.Our store employees are being harassed by these whiskey groups.It’s causing a lot of stress and turmoil with our staff.”

Give them time to unload the freight.Don’t pressure them … .’

“ ‘At the same time, be ready when it hits the shelf.You’re not going to have the opportunity to buy it if you’re 10 minutes late.’ ”

Schmierer’s private Facebook group — which does not allow secondary reselling, he says — includes about 150 members.They are split over the new Liquor Division policy, Schmierer says.

Him personally? “I’m torn, yeah.At the same time, I’m very irritated at anyone who has harassed any of the employees.I’m behind a change that makes life easier for the store employees.”

‘Ravenous’ buyers Surrounded by booze at the Garden City liquor store on a recent weekday, staffers sounded ready to do a celebratory shot.

Derrick Harris, a clerk, said some bourbon enthusiasts — as fun as they can be — have gotten “ravenous.”

Highly sought-after Blanton’s bourbon retails for $59.95 at Idaho State Liquor Stores.In addition to lessening in-store madness, the new rules theoretically will stop what Friend describes as “incessant phone calls on freight days.‘Do you have any Blanton’s? Do you have any Eagle Rare?’ ”

Until now, Idaho has been akin to a bourbon hunter’s paradise.

The state-controlled stores sell even the most desirable products at retail prices.Inventory was relatively easy to track, even if quantities are updated only every 24 hours.

And specific, hard-to-find products were available only at certain stores.

The hottest annual items — such as Pappy Van Winkle and Buffalo Trace Antique Collection whiskeys — are sold through a lottery system.That will continue.But this year, the Liquor Division has done fewer lotteries of other brands than it had in prior years.

Meanwhile, less-expensive coveted bourbons such as Blanton’s or Eagle Rare 10 Year — $59.95 and $35.95, respectively — are being snatched up by savvy collectors.Idaho stores receive about 800 bottles of Blanton’s each month and 480 of Eagle Rare.

‘Unicorn in the wild’ Not everyone can line up at a store on a weekday morning with their buddy, girlfriend, boyfriend or grandma to slay elusive prey, one bottle at a time.

It won’t matter anymore.Even employees don’t know what’s coming when a delivery truck shows up.And they are under no orders to immediately stock shelves with rarities.

Managers have latitude to put bottles out at their discretion.

On a recent Saturday, a man at the Boise liquor store on ParkCenter Boulevard stumbled upon a bottle of rare Blood Oath bourbon, according to Faraca.“The customer was so excited and surprised to have the opportunity to buy this bottle,” he said, “because they always sell out moments after being placed on the shelf, and he never would have had the opportunity under our prior format.

This is exactly what our new policy is intended to do.

“If this somehow turns out to be a terrible idea, then we’ll modify again.We’re just trying to keep it as fair as possible, so as many people as possible can get our product at the manufacturer’s suggested price.”

Torn or not, Schmierer appreciates the sentiment.

“Whiskey was not meant to be hoarded and consumed home alone, hidden in a closet,” he said.

“It’s meant to be shared with people.”.

Tue Nov 2 , 2021
Virat Kohli.(Reuters Photo) DUBAI: Indian captain Virat Kohli on Sunday criticised the scheduling of his team’s first two matches in the ICC T20 World Cup, saying that spreading the games over more than a week was “ridiculous”. India, who are taking on New Zealand in a vital match this evening, […]