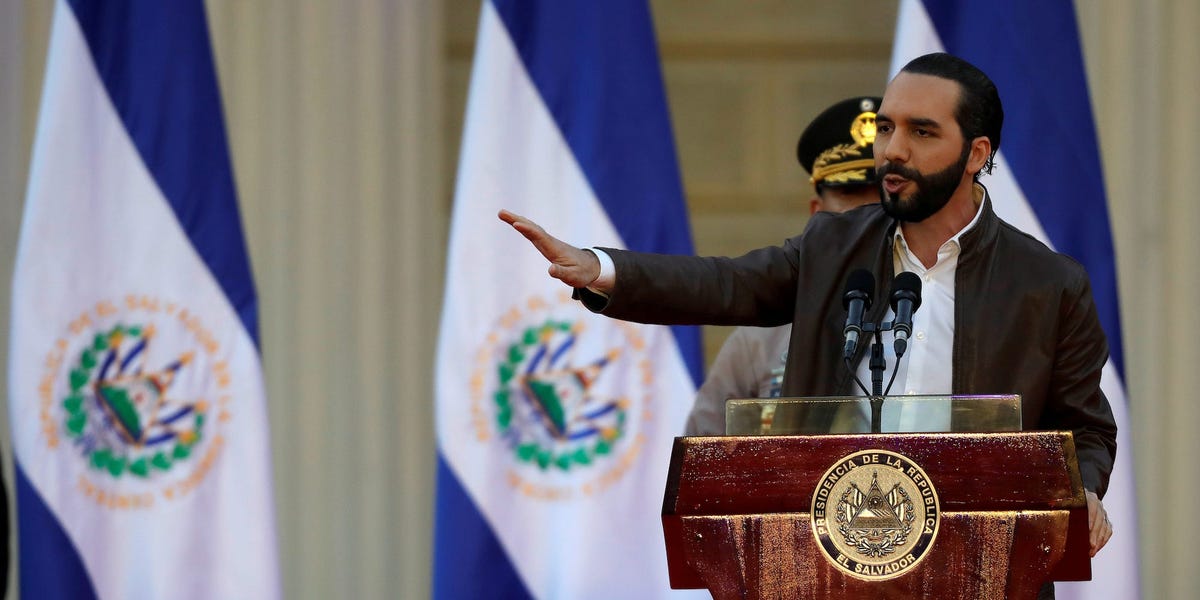 Email address By clicking ‘Sign up’, you agree to receive marketing emails from Insider as well as other partner offers and accept our Terms of Service and Privacy Policy .El Salvador bought its first 400 bitcoin and plans to soon buy “a lot more,” as the country nears the Tuesday deadline to make bitcoin the country’s official currency, President Nayib Bukele tweeted on Monday.

“El Salvador has just bought its first 200 coins,” Bukele said in a series of tweets on Monday.”Our brokers will be buying a lot more as the deadline approaches.”

Hours later, Bukele said the country bought an additional 200 bitcoin, giving it a total of 400 bitcoin.

The bitcoin purchases, coming just a day before El Salvador’s bitcoin law will come into effect, amount to roughly $20 million as of Monday’s price .

It’s the first step toward El Salvador’s ambitious attempt to make bitcoin legal tender, which is set to draw a lot of attention from cryptocurrency enthusiasts to monetary policy experts around the world — while transforming the daily life for Salvadorans.

—Nayib Bukele 🇸🇻 (@nayibbukele) September 6, 2021 —Nayib Bukele 🇸🇻 (@nayibbukele) September 6, 2021 In June, El Salvador passed a law that will make it the first country to establish bitcoin as legal tender alongside the US dollar, the country’s current national currency.All entities in the country will now have to accept bitcoin as a payment method for goods and services, and Salvadorans will be able to use the cryptocurrency to pay taxes.

El Salvador is the smallest country in Central America in terms of population, according to the World Bank.Its economy is the 106th out of the 195 countries the International Monetary Fund ranks.

The country’s looming bitcoin rollout has not been so smooth.

Salvadorans complain they have received little official communication from the government, leaving them in the dark on what the transition will mean for them.Global banks and rating agencies have questioned the decision, saying it could jeopardize the much-needed IMF lending talks, hurt local insurers , and even weaken the bitcoin network .

Last month, protests erupted in the capital city of San Salvador, with people fearing for their pension payouts potentially getting wiped out and money laundering activity increasing in a country where corruption is endemic .A poll taken in July found that 75% of Salvadorans have reservations about the law .

Still, Bukele seems confident in the country’s looming bitcoin adoption.In a Twitter thread last month, the 40-year-old president called the opposition “liars” who would be exposed once the law comes into force.He said those worried about their pension or businesses will be able to keep dealing in dollars as usual, since bitcoin use isn’t mandatory.

On Monday, Bukele expressed the same level of confidence in his Monday tweet .

“Tomorrow, for the first time in history, all the eyes of the world will be on El Salvador,” Bukele wrote.”#Bitcoin did this.”

Wed Sep 8 , 2021
Good morning and welcome to Fox News First.Here’s what you need to know as you start your day … State Department trying to steal credit for rescue of 4 Americans from Afghanistan, organizer says: ‘Total lie’ The organizer of a private mission to rescue an American mom, Mariam, and her […]