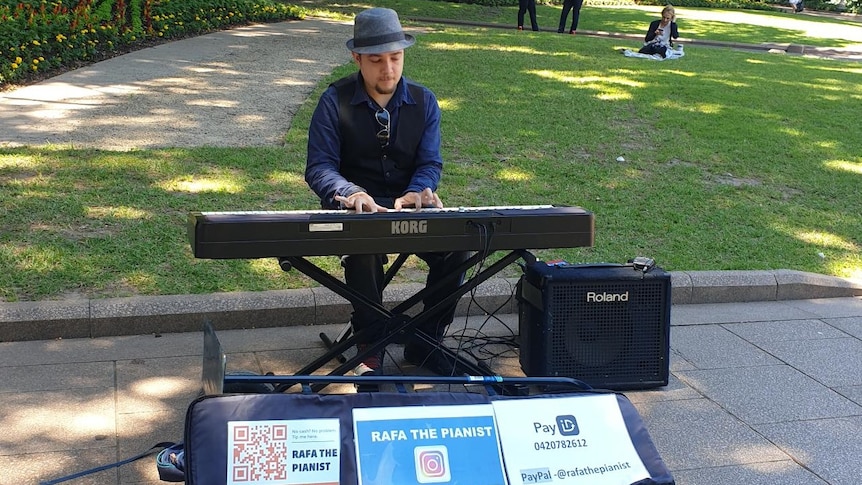 A lot has changed since COVID-19 first struck, including the way we pay for things.It’s something that Sydney busker Rafael Tavares learned the hard way.Even before the highly contagious Delta variant ripped through Greater Sydney and triggered a three-month lockdown, he noticed that many people who watched his outdoor performances were no longer carrying cash (or even wallets).”There are days that we expect a lot, but we earn very little,” said Mr Tavares, a former construction worker who goes by the stage name Rafa the Pianist.

“And there are days we don’t expect much, but we make a lot.” Determined to keep up with the latest trends, Mr Tavares, who plays his electronic keyboard across the Sydney CBD, began experimenting with several cashless payment methods.His audience can now use their mobile phones to pay him via PayPal or make an instantaneous payment to his bank account (by typing in his PayID or mobile number).They can also scan a QR code which takes them to his profile on “Busk” – a website specially designed to facilitate electronic payments to buskers worldwide.After two months, Rafa the Pianist observed that: “Eighty per cent of [my] income is cash — coins and notes — and 20 per cent is [from] a cashless payment.” His earnings have also dwindled in the past few months, but he believes that’s more due to lockdowns than our shift towards abandoning cash.

Most signs point to Australia becoming a cashless society within years, or at least one where cash is a “niche” payment method .Back in December 2008, we (collectively) withdrew more than $13.5 billion from ATMs each month.Since hitting that peak, the trend has been a rapidly declining one.When COVID fears hit fever pitch in April 2020, that ATM withdrawal amount plunged to $6.2 billion — down by more than half.

It then rebounded to about $8.5 billion per month (which is still a 37 per cent drop over the past decade), according to Reserve Bank data analysed by the Australian Banking Association.In comparison, the number of purchases made on credit and debit cards has skyrocketed in the past decade.Increasingly, consumers are also using digital wallets like Apple Pay, Google Pay and Samsung Pay to pay for their goods.About seven out of every 10 smartphone users pay with digital wallets each week.

Consumers have also gravitated towards buy now, pay later (BNPL) apps like Afterpay, Zip and Openpay, which are similar to old fashioned lay-by except you can take your goods home straight away.In the past financial year, Australian retailers processed more than $9 billion worth of BNPL transactions.

Testament to its rapid growth, that amount has tripled in the past couple of years .Paying with smartwatches (linked to your debit or credit card) is also becoming increasingly popular.However, buying goods and services with cryptocurrencies like bitcoin remains extremely niche — given its price volatility.Its value has swung from $US24,600 ($34,000) to a record high of $US68,990, then crashed to $US46,600 throughout the past year.Bitcoin buyers are mostly buying it to hold onto like “digital gold “, hoping its value will skyrocket in time.At one stage, Tesla’s chief executive Elon Musk said his company would let users pay for its electric cars using bitcoin .

Then he backflipped and said Tesla would no longer accept the digital currency due to environmental concerns from “bitcoin mining”, before indicating the company will most likely start accepting bitcoin as a payment method again at some stage.Some brave people in Sweden have even injected microchips into their hands as part of a growing “biohacking” movement.These Swedish early adopters are able to pay for goods, enter a gym and earn loyalty points at supermarkets without carrying any cards or cash.Australia is not quite there yet.Reserve Bank governor Philip Lowe has flagged that Australia could, one day, issue a central bank digital currency, or an “eAUD” – something that other countries like China are making faster progress with .But the RBA governor warned: “To date, though, we have not seen a strong public policy case to move in this direction , especially given Australia’s efficient, fast and convenient electronic payments system.

“It is possible, however, that the public policy case could emerge quite quickly as technology evolves and consumer preferences change.” The Internet is awash with predictions on when Australia will become a cashless society.Payment firm FIS predicts the nation could go 98 per cent cashless by 2024, while the Commonwealth Bank anticipates it might happen in 2026 .However, cash experienced an unexpected revival during the COVID-19 pandemic.Before the pandemic, there were about $80 billion in notes circulating in Australia.Within a year, that figure swelled to $100 billion — a 25 per cent increase in a very short period .

Even though electronic payments have surged, people have been withdrawing record amounts of $50 and $100 notes — not to spend, but to hoard.That’s despite the fact this money isn’t earning any interest.”Much of the strong demand for banknotes can be attributed to people’s desire to hold cash for precautionary or store-of-wealth purposes ,” RBA economists said in a research paper on cash demand published in March.”This behaviour is common during periods of significant economic uncertainty and stress, and many other countries saw similar patterns of cash demand.” Even loose change experienced a renaissance recently.Before the pandemic struck, demand for coinage had plunged by more than 55 per cent over the past five years.

The Royal Australian Mint was expecting 5 and 10 cent coins to be phased out over the next decade.But after COVID struck in early 2020, staff at the Mint had to work double shifts to keep up with the unexpected demand.

“Due to the unexpected demand for circulating coins, the Mint increased production of all six denominations of circulating coins,” the national institution wrote in its 2020-21 annual report.The Mint’s chief executive, Leigh Gordon, told the ABC that: “Examples like COVID, and other sorts of crises like that, reinforce the confidence that people have in cash.So I actually think cash will be part of the mix for a long time to come.”I certainly wouldn’t be brave enough to predict a future where there is no cash.” However, Mr Gordon believes the spike in cash demand is temporary and will fade again as COVID fears subside.”I do expect that there is a long term declining trend.But I don’t really think it will decline down to zero.” Despite electronic payments being indisputably quicker and more efficient, there are strong reasons why physical cash shouldn’t be completely eliminated.

Those living in regional Australia, particularly those who lived on the frontline of the 2019/20 bushfires, know firsthand why cash is a reliable fallback option when all else fails.Michael Keys, who owns a service station in the NSW beachside town of Batemans Bay, said businesses and customers had to rely heavily on physical money during the bushfires as the electricity and internet infrastructure had been knocked out.”From a business perspective, unless you’ve got infrastructure in place that’s very reliable, you can’t get rid of cash,” he told the ABC.”I think it would cost more to get rid of it than what you’re trying to achieve.” If Australia switches to become a cashless economy too quickly, it would also disadvantage several groups including “the elderly, or folks who don’t feel comfortable using technology, folks living in remote and regional areas, new migrants, and even children,” said Dr Chris Vasantkumar, a payment methods expert from Macquarie University.”If you look at different countries, there are really different levels of continuing cash usage right now.In places like Japan, folks there have thousands of dollars in their wallet.

“The Germans love their cash, especially in the eastern part of the country, where they have long memories about surveillance [under the Soviet Union] and the state watching them.” Research from the RBA shows that a quarter of Australian consumers would face “major inconvenience” if they could no longer use cash – and that frequent cash users were more likely to be older, have lower household income, live in regional areas and have limited internet access.It’s possible that Australia is heading towards a world where physical cash is hard to come by – though not everyone will be a winner.

From shipping containers to stock tanks, quirky swimming pools are making a splash